Firewood: The claimer of lives [Article] 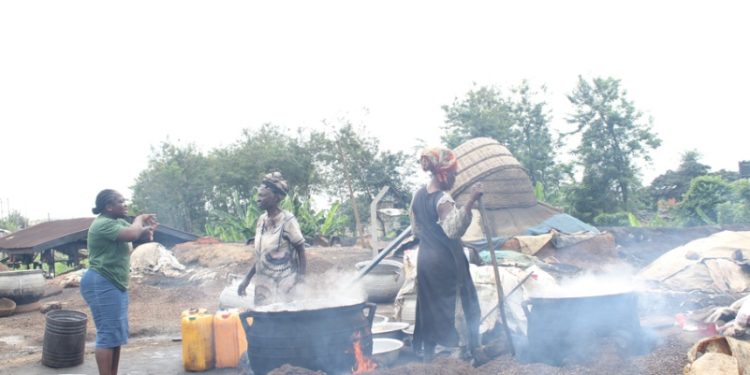 File Photo
The month of October continues to be a sensitive and emotional month for the majority of women, especially those who have battled, survived, been diagnosed with, or lost loved ones to breast cancer. Numerous factors have been linked to this condition in studies, but extended exposure to household air pollution (HAP), one of the disease’s silent causes, has received little attention in the mainstream literature. Using an indoor wood-burning stove or fireplace at the longest adult home at least once a week, and burning either wood or natural gas or propane, was linked to a modestly increased risk of breast cancer, according to a 2017 study by White et al. As we commemorate Breast Cancer Awareness Month, let’s resolve to work together to save these women who could be at risk of dying from these fuels. Imagine a woman having to inhale this toxic air virtually every day for her entire life simply because she needs to burn fuel to meet her family’s cooking energy demands. It’s no surprise that the United Nations (UN) General Assembly has defined access to a healthy, clean environment to be a global human right. The international community has granted this right universal status, bringing us closer to making it a reality for all. Polluting fuels such as charcoal, firewood, and agricultural residue are generally burned in rural areas on a daily basis in primitive, inefficient cookstoves made of stone and mud. This is an inefficient method of cooking that creates major health issues due to HAP. If the aforementioned study found an increased risk of breast cancer with weekly exposure, what about our rural women who are exposed to HAP two times per day on average? Constant research has shown that, about three billion people around the world cook their food and heat their homes with open or barely contained fires, and while the smoke dissipates quickly, its accumulated costs are steep. The typical cooking fire produces about 400 cigarettes’ worth of smoke an hour, and prolonged exposure is associated with respiratory infections, eye damage, heart and lung disease, and lung cancer. In the developing world, health problems from smoke inhalation are a significant cause of death in both children under five and women. Around three billion people throughout the world cook their food and heat their houses with open or barely confined flames, and while the smoke dissipates rapidly, the accumulated expenses are high. Aside from the increased risk of breast cancer in women, firewood is responsible for over 3.2 million deaths per year, which is extremely concerning. According to the World Health Organization, over a million people die prematurely from ischemic heart disease, approximately 12 % of all deaths due to stroke, 44 % of all pneumonia deaths in children under the age of five, 22 % of all adult deaths due to pneumonia, 23 % of all deaths from chronic obstructive pulmonary disease (COPD) in adults in low- and middle-income countries, and approximately 11 % of all deaths due to pneumonia, and approximately 11% of lung cancer deaths in adults are attributable to exposure to HAP. There is also evidence of links between HAP and low birth weight, tuberculosis, cataract, nasopharyngeal and laryngeal cancers. However, statistics on the exact number of lives lost to breast cancer is still scarce. Furthermore, because they frequently labor over household activities such as cooking and collecting firewood and spend more time exposed to toxic smoke from polluting stoves and fuels, women and children incur the highest health burden from polluting fuels in households. In the case of Ghana, despite attempts to enhance uptake of clean cooking fuel over the years, the country is among 20 countries that account for more than 80% of the global shortfall in access to clean cooking fuel. 87 % continue to use solid fuels such as wood and charcoal as their principal cooking fuel, affecting over 20 million people and resulting in over 6,500 deaths per year, including 4,700 deaths among children under the age of five. Coupled with the multiple health concerns, the World Bank estimates that lack of progress in clean cooking costs the world more than $2.4 trillion per year, driven by negative effects on health, environment, and gender equality. Women bear a disproportionate amount of the expense of poor health and safety, as well as lost productivity,” said Makhtar Diop, World Bank Vice President for Infrastructure. As a result, customized initiatives to reach the poor and vulnerable in rural and urban regions while expanding access will be a positive move. The need for a more targeted strategy to advocacy, campaigning, policy design, and policy execution to encourage the use of clean cooking fuels will be a major assert in this critical energy transition era. In addition to breast cancer awareness marches, screenings, and countless lectures, let us begin to channel resources and efforts to accelerate access to clean cooking technologies in order to preserve lives, the environment, and biodiversity. Therefore, policy pathways that synchronise the major stakeholders in the cooking space: governments, non-governmental organizations (NGOs), researchers, investors, entrepreneurs, and end-users are what would bring a significant breakthrough within the clean cooking ecosystem as we strive to meet our global targets by 2030. Written by: Rejoice Ntiriwaa Ossei-Bremang Winner, Clean Cooking Women Leaders Award Policy, Advocacy and Research Clean Cooking Alliance Disclaimer: I am not a practitioner of medicine or health. The entire basis for this article is my personal viewpoint as a researcher working within the clean cooking ecosystem. References: White, A.J. and Sandler, D.P., 2017. Indoor wood-burning stove and fireplace use and breast cancer in a prospective cohort study. Environmental health perspectives, 125(7), p.077011. https://doi.org/10.1289/EHP827 World Health Organization. https://www.who.int/news-room/fact-sheets/detail/household-air-pollution-and-health Ghana Country Action Plan for Clean Cooking https://cleancooking.org/binary-data/RESOURCE/file/000/000/334-1.pdf United Nations. https://news.un.org/en/story/2022/07/1123482
Be the first to comment!
Leave Your Comment