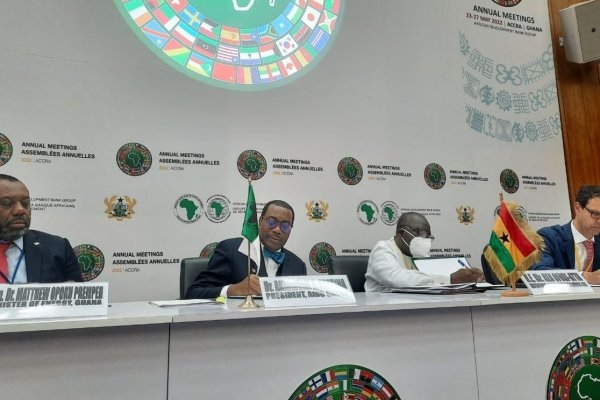 AfDB president Akinwumi Akin Adesina (L) with Ghana's Finance Minister Ken Ofori-Atta (R) singing the deal
Ghana has signed a $69.88 million renewable energy agreement to enhance electricity access in the next four years. Under the agreement, about 6,890 households, 6,001 Small and Medium-sized Enterprises (SMEs), and 6,890 public buildings will be connected to electricity. About 1,350 schools and 500 health centres would also benefit from the project, which would include the design, engineering, supply, construction, installation, testing, and commissioning of mini-grids and standalone systems. Seventy communities across nine Island districts through mini-grids, 505 communities in 11 districts through standalone solar photovoltaic (PV) systems in the country. The “Scaling-up renewable energy Programme (SREP),” is to close Ghana’s 12.8 per cent electricity reach deficit by increasing access to clean and reliable energy and support socio-economic development. It is to also help reduce public sector electricity debt as well as bills for SMEs and households while supporting the implementation of environmental, climate, and social management plans in the country. Mr. Ken Ofori-Atta, Minister of Finance signed the protocol agreement with Dr Akinwumi Akin Adesina, President of the African Development Bank (AfDB) Group. He also signed the financial agreement of the project with Mr. Dominique Paravicini, AfDB’s Governor for Switzerland. Speaking at the signing of the agreement, Mr. Ofori-Atta, said the project: “Dovetails fittingly into an urgent global agenda and demonstrates our country’s commitment to enhance the economic and social viability of low carbon investments. It is also in support of the country’s commitment to creating new energy-efficient markets and stave-off a future energy crisis by achieving energy sufficiency. The project also: “Fully align with the Government’s overarching ambition of increasing the contribution of Renewable Energy in the generation mix to 10 per cent by 2030 while achieving our emission reduction targets,” he added. Mr. Ofori-Atta indicated that the project would provide stable and cheaper electricity to hundreds of people across the country and usher in new economic opportunities, particularly for women in rural areas. On his part, Dr. Adesina noted that the project would support Ghana in meeting its renewable energy requirement on the Sustainable Development Goals (SDGs) and build a resilient economy. “This project will increase access to clean and reliable electricity services and support low carbon socio-economic development of Ghana. It will directly support Ghana’s efforts in building resilience to the socio-economic impact of the COVID-19 pandemic.” This would be done through the provision of electricity to healthcare centres, Island communities, enabling the refrigeration of vaccines and testing facilities for COVID-19. “The project will facilitate the self-sufficiency of Ministries, Departments, and Agencies (MDAs), through rooftop solar power generation and storage under the net metering component,” he added. Mr. Paravicini, said that the signing of the agreement showed Switzerland’s continuous support to bring sustainable and affordable electricity to households and businesses. SREP would be implemented between 2022 and 2025, under three components; the first would comprise of the development of 38 mini-grids and standalone solar PV systems for 2,000 SMEs, 1,350 schools, 500 health centres, and 400 communities. The second component, which is net metering, aims at up-scaling existing projects to about 12,000 units of roof-mounted net-metered solar PV systems to reduce public sector electricity debt and bills for SMEs and households. The final component would be the supervision of works including operating costs for the SREP Project Implementation Unit, Distribution Utility, and the implementation of environmental, climate, and social management plans.
Be the first to comment!
Leave Your Comment