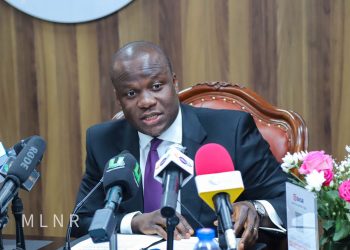 Samuel Abu Jinapor
The Minister of Lands and Natural Resources, Samuel Abu Jinapor thinks the Aisha Huang case has been sensationalized. According to him, Aisha Huang is no different from other foreigners who have flouted the laws of the country. Mr. Samuel Abu Jinapor told Umaru Sanda Amadu on Face to Face on Citi TV that it is outrageous to center the government’s effort in fighting illegal mining (galamsey) on “a Chinese woman, who has flouted the rules of the country.” “The Aisha Huang case should not be looked at in isolation, but in the context of foreigners being involved in Ghanaian industries and perpetuating criminality and how we deal with it. Yes, it’s unfortunate that she entered the country after she was sent away, but that should not be the focus.” “We are making it seem as though the entire effort of the President and government revolves around Aisha Huang. Aisha Huang is just a Chinese woman who flouted the laws of Ghana and cannot be a test stone. She is no different from the foreigners arrested a week ago.” Since Aisha Huang was arrested earlier in September, there have been several claims about how she left the country in 2018 and when she re-entered. Despite the government providing evidence of a repatriation notice and the Information Minister, Kojo Oppong Nkrumah, saying she was repatriated, the prosecutors in court on Wednesday stated that Aisha Huang sneaked out of Ghana after her arrest in 2017. The initial report on the case was that she had been deported in 2018 after filing a nolle prosequi to discontinue an earlier case against her. It also emerged that Aisha Huang in the wake of her re-arrest over illegal mining activities in the country despite her deportation was found to be in possession of a Ghana Card bearing the name Huang En.
Be the first to comment!
Leave Your Comment