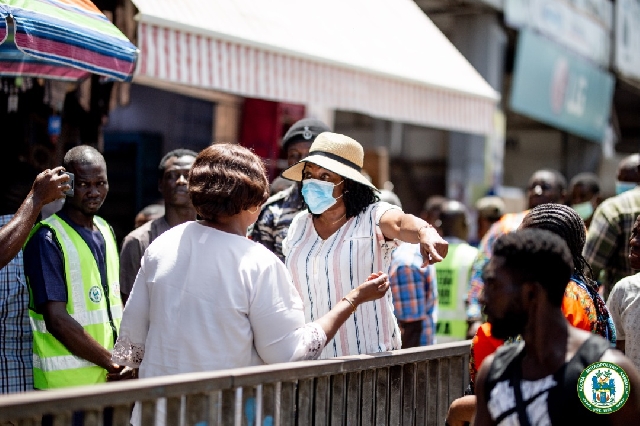 Accra mayor Elizabeth Sackey on an inspection tour in parts of the capital
A total of 115 people have been prosecuted by the Accra Metropolitan Assembly (AMA) for failing to comply with its 2017 sanitation by-laws between January and March 2022. Their offences include dumping waste into drains, burning refuse in residential areas, having unsanitary drains in front of their premises, not registering with accredited waste collectors, having overgrown weeds in their surroundings, lacking household toilets and defecating in the open. The rest of the offences were the lack suitability, health and safety certificates; preparing and selling food under unhygienic conditions, and lacking a food handlers’ certificate. Accra mayor Elizabeth Sackey, who disclosed this in Accra said that during the first quarter of the year, 345 summons were obtained from the court and out of which 304 were successfully served on offenders. She noted that 12 cases were adjourned with 9 bench warrants yet to be effected, adding that 168 of the cases were still pending. The mayor said the prosecutions form part of ongoing measures by the AMA to enforce its by-laws to ensure a clean city pointing out that it was an offence under the by-laws if a person fails to keep the drains that abut his premises, up to the middle of the street, clean; provide a standard container for refuse storage, or uses the services of an unregistered solid or liquid waste contractor, or discharges effluent into the open drains, operates a public or commercial toilet without a valid permit, defecates in the open drains, or indiscriminately dumps solid and liquid waste in open spaces, drains, gutters, behind walls, or burns solid waste on one's compound. She reiterated the Assembly's commitment to enforcing the by-laws to deter would-be offenders and urged all residents to be responsible toward the environment, adding that the Public Health Department would be visiting household premises for routine checks.

You're doing a great job and please keep it up.