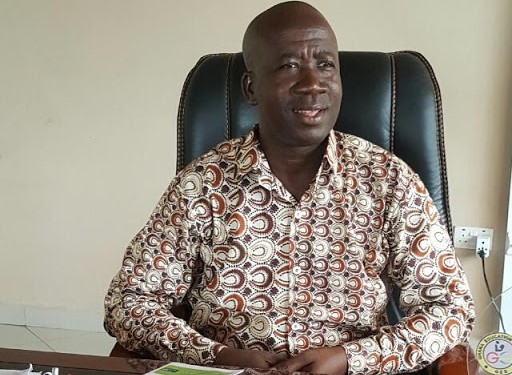 Mr Yaw Danso
The District Chief Executive (DCE) for Bosome Freho, in the Ashanti region, Mr Yaw Danso has caught the anger of his people for openly declaring his inability to deal with the menace of illegal mining which has become rampant in the area. What is even worse, the DCE was also caught on tape, saying that, it is never his responsibility to secure the Bosomtwe Range forest reserve in his area which is also under serious attack as a result of the ongoing illegal mining. It all started when residents of Dannso in the Bosome Freho District, last week demonstrated against illegal mining activities in the forest reserve which is affecting their only source of good drinking water, as well as causing massive deforestation. The angry demonstrators at a point threatened bloodshed if the illegal activities persisted and went further to accuse the DCE of the area, Mr Danso of providing his support to the illegal miners, hence the wanton destruction of the forest at the full glare of the District Security Committee (DISEC) which he chairs. Armed with the information from the angry residents, a local journalist by name Nana Peprah, who covered the demonstration decided to place a call to the DCE to get responds to the numerous allegations levelled against him and according to him, that was when he received the rude shock of his life. “In fact, he gave me cheeky answers to all the questions I posed to him which I recorded though and he made me to understand that, it is not his duty to take care of the forest reserve if someone is destroying it”, the journalist told ghenvironment.org. Nana Peprah narrated, “Even before I placed the call, I joined my other colleague journalists to visit him at the office to get his reaction but we were directed to see the deputy coordinating director at the time since Mr. Yaw Danso (the DCE) was not present in the office. After a series of discussion with the deputy coordinating director, I decided to call the DCE personally”. “When he was asked if he had any prior knowledge regarding the ongoing destruction in the forest reserve, he asked back whether it is his duty as DCE to take care of a forest reserve if someone is destroying it, urging me to go and see the authorities of the forest”, he added. According to Nana Peprah, when the DCE was asked to react to his alleged involvement in the ongoing illegality, he failed to give a definite answer but rather directed him (the journalist) to report to the police to help arrest the perpetrators, since they are also Ghanaians.

But, in an interview with ghenvironment.org, the Chairman of the Concern Citizen of Dannso, Opanin Kwabena Kyei, expressed shock over the outbursts of the government representative in the area. “As head of DISEC, is the DCE telling us that, someone can just come here and do mining in our forest reserve without his knowledge? he asked, adding, he can’t deny it. He warned that, the residents of the community would continue to resist the illegal mining activity as their only source of water for their survival is being destroyed, as well as their cocoa farms. "They are destroying our only source of water called river "Danne", including our protected forest reserve and other farm produce and we are going to stop them with our will and might once our authorities are playing the ostrich” he warned.
Be the first to comment!
Leave Your Comment