Galamsey: Ghana is sick, the nonsense must stop - Lawrence Tetteh 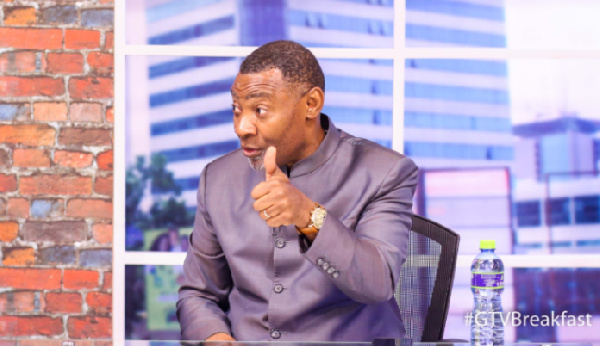 Reverend Dr Lawrence Tetteh
Renowned Ghanaian evangelist, Reverend Dr Lawrence Tetteh, has said that it is high time Ghana gets serious about fighting the menace of illegal mining. Ghana over the years has been battling with illegal small and large scale mining which has rendered several of the nation’s river bodies unwholesome to human consumption. Speaking on GTV’s Breakfast Show, Dr Lawrence Tetteh said the fight against the menace has got to be taken beyond mere talking and translated into real action. According to him, the stakeholders in the fight against galamsey have every idea of the perpetrators behind the illegal act and that it should not be hard for action to be taken against such persons. “I think enough of the talk of ‘we don’t want galamsey’, we should lock it. And trust me the chiefs know where the people are, the politician knows where the people are, the assemblymen know where the people are, the parliamentarians know where the people are, the police know where the people are, the army knows where the people are, immigration knows where the people are. So what is wrong” he questioned. He related the failure of the country in managing illegal mining to being sick as a nation and called for the politicization of the conversation around galamsey to cease. “We are sick as a nation and we must wake up, and stop polticising everything because this nonsense must stop. And as a matter of fact, (we are) a sick nation, Ghana is sick. This is sad,” he bemoaned. The founder and leader of Worldwide Miracle Outreach noted the effects of the galamsey menace which he emphasized threatens the survival of future generations among other things. “We have brothers and sisters, all of us here are connected to these villages and so we are killing our own. By the time you will realise, the little brains that we can develop for the future..... if we the adult cannot survive this, how will the babies survive it? “We are destroying the generation and posterity will judge all of us. We all have a collective responsibility to get this nonsense stop. And if I say this nonsense must stop, politicians will be thinking, NPP and NDC will be thinking you are talking to them. But this is absolute nonsense, and it must stop,” he added.
Be the first to comment!
Leave Your Comment