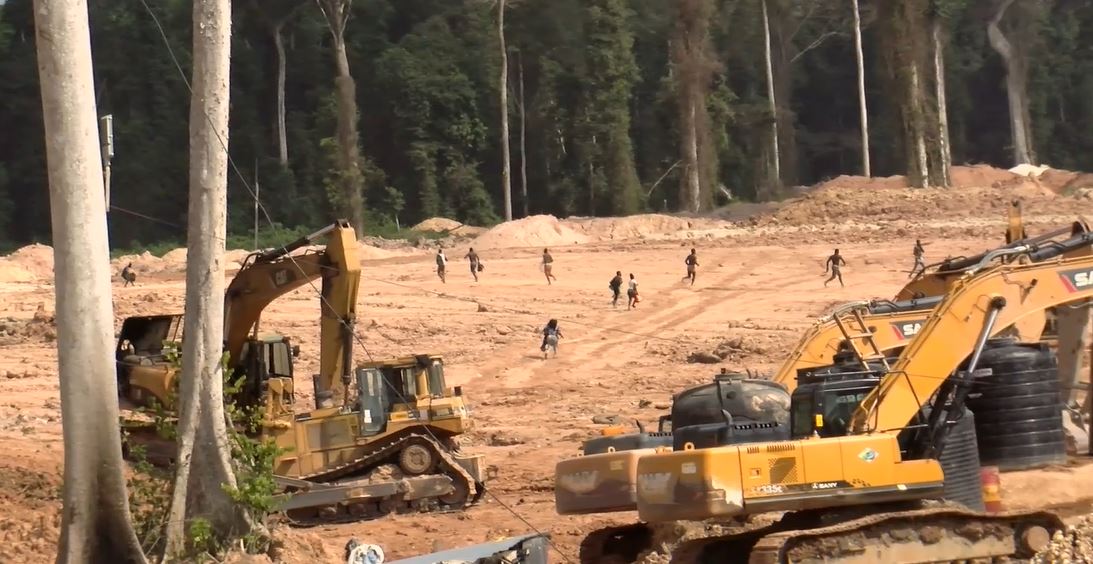 Government’s Environmental Sustainability taskforce has arrested seven Chinese Nationals and seized 10 excavators as it moves to save forests invaded by illegal miners in the Western region. The initiative is part of government’s effort to save the country’s environment and water bodies which have been affected by illegal mining activities. The invasion comes after the taskforce got information that the illegal Chinese miners destroying the forest had no permits. The illegal miners are said to have invaded the forest destroying natural resources spanning about ten football fields. Currently, the Oda River which runs through this forest has become dirty filled with mud and no sign of life. The thick forest cover has been depleted with scenes of tree species cut and buried in mud. The aftermath has left travelling paths in a dangerous situation, making one of the commanders lose his balance as they thread the routes. The taskforce stormed the Taabosere forest enclave at dawn and caught these Chinese miners unannounced. A Ghanaian illegal miner, Issah Odartey had a physical confrontation with the taskforce claiming the concession was awarded to him by the Minerals Commission but had no documents to prove himself. According to him, he pays ¢20,000 every month to the Minerals Commission, another claim, he could not prove. At the site, Luv Fm’s Erastus Asare Donkor said they found close to 12 excavators and the supervisor there, one man by name Omar said they were mining with permission from some powerful people. A man who identified himself as Charles Owusu, a relative of the late Sir John claimed ownership of the illegal mining site begging the taskforce to leave the site. But the taskforce removed all the excavators and transported them across the Oda river. In all, 10 excavators were effectively tracked out of the forest. Seven Chinese miners were arrested and sent to Accra for processing.
Be the first to comment!
Leave Your Comment