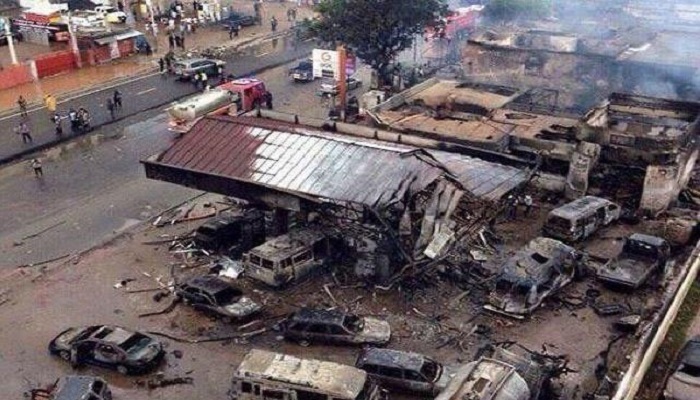 File photo (The June 3 disaster at Kwame Nkrumah Circle)
It was a rainy and windy night. Just as had been the norm, the Goil Filling Station at Circle and many other filling stations across the country provided temporary shelter for commuters who are usually caught up by rains while in transit to or from work. The night of June 3, 2015, was not an exception. But an avoidable disaster struck when floodwaters, fire and fuel merged to cause a great inferno, which left at least 154 dead and more than 200 injured and 2500 affected. For some, this may sound like a ritual recall of statistics, but it is not. These are the real lives of fathers, mothers, wives, husbands, brothers, sisters, aunties, uncles, children, old and young that were affected by the tragedy.As expected, authorities rushed to the scene the following day with the “usual” promises to bring perpetrators to book. Seven years on, no one has been held accountable for this avoidable disaster. The government of the day and the government today have all but paid lip service to justice, accountability, and commensurate compensation for victims. The disaster of June 3, 2015, was not an Act of God. They were the combined consequence of bad governance and corporate negligence on the part of politicians and public office holders who owed the people of Ghana a duty of care. The OneGhana Movement has since 2017 been pursuing justice for the victims and people of Ghana. The Movement and the victims, through our lawyers Samson Lardy Anyenini and Keli Kwesi Delataa (both working pro bono for this cause) commenced a class action lawsuit in 2018, pursuing GOIL, the National Petroleum Authority (NPA) and the Accra Metropolitan Assembly (AMA) for their complicity in the disaster. It is our hope that the pursuit of justice will not only result in fair compensations for victims and their families but will, in the end, punish officials found culpable, and drive the sense of accountability and responsibility on the part of citizens, corporate Ghana, and public officials. Avoidable disasters will not stop when no one is punished for their negligence and dereliction of duty. On June 3, we said “never again” and yet again there was the La gas explosion, the Atomic explosion, Takoradi explosion and more. We certainly cannot go on like this as a country! Seven years on, we remind the government and the judiciary that justice delayed for the lives affected is justice denied and a failing of the duty of care owed to our fellow citizenry.
Be the first to comment!
Leave Your Comment