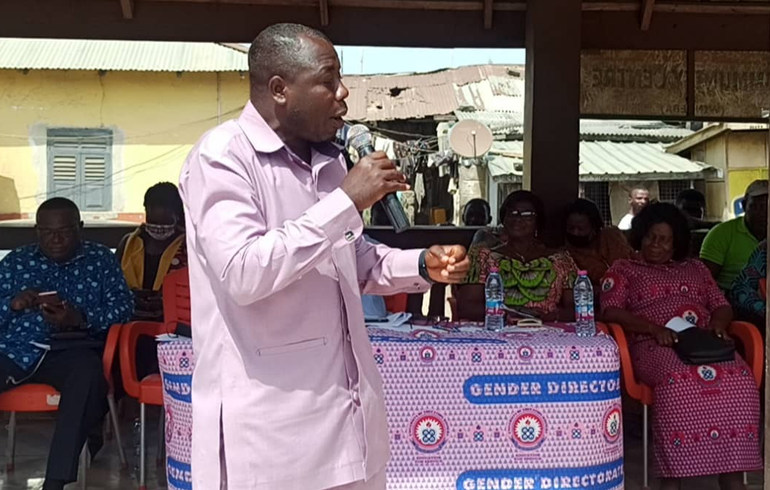 Alhaji Kassim Zubairu
The Effutu Municipal Chief Executive (MCE), Alhaji Kassim Zubairu has warned that, the Assembly is not endorsing any mining activity in the area, despite the moves by the Minerals Commission. There are fears that Ghana could lose its renowned Cultural Heritage Site and Ramsar Site at Winneba in the Central Region following the pending application of a mineral rights in the area in accordance with L.I. 2176. Published by the Minerals Commission on 19th May, 2022, and awaiting the final approval, the permit when granted, will give Green Metals Resources Ltd the opportunity to carry out large scale mining concession in the Efutu area. But, addressing a press conference in Winneba, the MCE disclosed that, in line with the Traditional Council, the forest and the Ramsar site would be protected as their heritage. He said “We are not endorsing any mining activity in the Municipality, what I know is that Winneba says No to any mining activity and I stand by the sovereignty of Winneba, it is for the good people of Winneba that I am here so anything Winneba wants that does not violate the laws of the state, I am in for it. He added “So to everybody in Winneba and Ghana, Winneba is saying No to prospecting, not alone mining in the Municipality. But if Minerals Commission has anything to offer Winneba apart from mining, we will uphold it and we are ready to take it. But with the mining of the lithium that they are looking for, it is totally no and Winneba should take it from me as the Municipal Chief Executive. This is in line with the traditional council". According to the MCE, the bush is their heritage and the Ramsar site and would not allow any mining in those areas, adding “Winneba should get it from me that, there is not going to be any mining relating to the lithium that people are talking about”. He also denied that final approval had been given, even though the mining prospecting has been gazzeted.

The Effutu Traditional Council has also expressed their displeasure over plans to mine forest areas around the Muni-Pomadze Ramsar Site for Lithium. Paramount Chief of the area, Nyenyi Ghartey VII while addressing the media said the people of Effutu will not accept any form of "development" that would destroy their environment. "Still, they insist on cracking the rocks to get whatever they want to take out of it. I don't even know what that thing is. They've made up their minds to destroy our land. All that we have as a people is what they want to ruin. They want to bring famine to our land. Our joy is what they want to end. They want to desecrate the sacred place of our ancestors.”, he said. “The Effutu State is aware of the long-standing idea of an interest in the minerals in the hills forming the boundary with the Gomoa areas… It is uneconomical because of the trace quantities of the minerals in there. The benefits and costs to the environment and society are unproportionally against the proposal,” he said. He cautioned that the Effutu Traditional Council would seek redress at the appropriate forum should the application be processed and a license granted for mining at the Ramser site. The Council has petitioned the District Wildlife Division of the Forestry Commission to register its displeasure against granting mineral application right by the Minerals Commission.

An Environmental Scientist had told the GNA that, the livelihood of about 10 communities whose main occupation was fishing and farming depended on the Muni-Pomaze Ramsar Site. He said oral tradition indicates that the people of Effutu first settled around the Muni-Pomaze before dispersing to the current township. The area, originally called ‘Kweku Boni’, but later westernized to Muni-Pomaze, also helped the Effutu people during the civil war to conquer their attackers by drowning them.
Be the first to comment!
Leave Your Comment