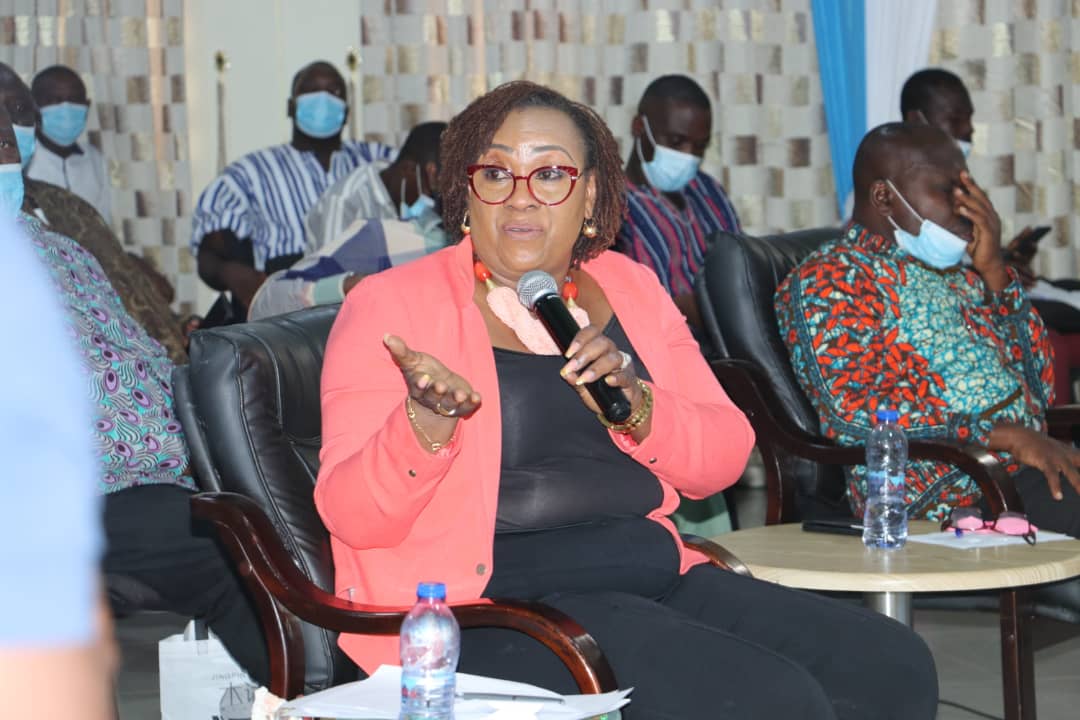 Hawa Koomson
The Minister for Fisheries and Aquaculture Development, Hon. Mavis Hawa Koomson has stated that, 2021 Closed Season Report available indicates that, more fish was harvested in 2021 closed season than that of 2019. She made this known during a presentation of the 2021 Closed Season Report to stakeholders in the fishing industry held in Accra. The stakeholder meeting among other things, discussed 2021 Closed Season Report and the way forward in their effort towards sustainable fisheries management, to restore the depleted fish stocks. Sharing the outcome of the report to both media and stakeholders in the fishing industry, Hon. Hawa Koomson averred, “The presentation revealed that increase in catches in 2021 was higher than that of 2019, implying that the timing of the 2021 closed fishing season in July yielded more catches for the artisanal and inshore fleet than that of 2019 (May and June). The report also provided that different types of species, both pelagic and demersal were observed being landed after the 2021 closed season compared to 2019 Closed Season (May & June). This suggest that the month of July for the Closed Season is appreciated”. She pointed out that, the 2021 Closed Fishing Season was assessed on factors including; socio-economic effects of the Closed Season; Analyses of Fish Catch Data; and Biological Studies of some commercially important fish species. The Minister said, the report clearly revealed that Fishers generally accepted the 2021 Closed Season and are willing to continue to observe the seasonal closed season. The Ministry according to Hon. Koomson, is aware of the short term effect of the closed season on the livelihoods and therefore, would ensure the provision of support to fishers during Closed Season to reduce the impact. Among the key points the Minister mentioned was gathered from the report comprises, the general acceptance of the Closed Season by Fishers as a management too to sustain the fishery. Also, some Fishers were not preferring July as the month for the Closed Season; Increase in landed fish immediately after the Closed Season; and Provision of Supports to Fishers during Closed Season. “In 2021 for instance, the Ministry distributed a total of 15,000 bags of rice and 6,250 cartons of cooking oil to fishers and fish processors during the Closed Season. In addition, a total of 5,221 outboard motors were also distributed to fishers during the closed season”. She assured of her Ministry’s commitment in ensuring that the gains made from observance of the closed season are not eroded by activities of illegal fishing. “The Ministry will empower the Fisheries Enforcement Unit to arrest and prosecute anybody involved in illegal fishing”. The Deputy Minister for Fisheries and Aquaculture Development, Hon. Moses Anim noted that, the activities of some artisanal canoe fishermen who goes to fishing with dynamites, lights and nets that even mosquitoes can’t passes through, contribute to challenges facing the sector. He said together with Hon. Hawa Koomson are committed to work towards the interest of the fishing industry devoid of bribery.
Be the first to comment!
Leave Your Comment