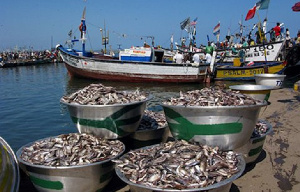 File Photo
Fishes harvested from the Densu River in the Weija-Gbawe area of Accra are polluted and may be dangerous for human consumption following a heavy faecal pollution of the river. XYZ investigations have revealed that fisher folks who catch fishes with their boats and nets have had to retrieve faeces and other solid waste from their catch before selling them to fish mongers. The Densu River flows from the Weija Dam into the ocean at different entry parts in the Greater Accra Region. TV XYZ reporter Piesie Okrah who visited the area recently reports that besides choked drains and filth engulfing the town, households along the banks of the once clean river had channelled their sewers that pollute the water with faecal matter.

When Piesie Okrah visited some of the communities in the area, the pollution was heavy as garbage could be seen floating freely in the river. Tei, a fisherman who has been working on the river for years bemoaned the level of pollution in the river which he says was once a source of drinking water for the indigenes. “Today, working on this river is not a good experience because of the level of pollution that has taking place here,” he told Piesie Okrah. He said he and other colleagues who have been fishing in the Densu river always harvest plastics and other wastes on daily basis. “Apart from harvesting a chunk of waste which is found in the river, the lives of the fishes in the river are threatened by the domestic activities around,” Tei indicated. According to the water Resources Commission, there are about 18 fish species in the Densu including the Weija Reservoir. However, the most commonly fished species are Tilapia and Mud-fish. “We used to catch mudfish and other species but because of the waste being thrown into the river, the fishes we catch look unhealthy,” he added. “Sometimes some of us catch fishes that have swallowed diapers and faeces.” Asked what they do to such fishes that had ingested condoms and other wastes, Tei noted that the fish mongers dress them and dispose off the waste before sending them to the market. Investigations by XYZ News reveal that fishes such as tilapia from the Densu river end up on markets along the Tetegu-Kasoa highway. Other markets are the Galilea market and others that are scattered at Tetegu and Weija.

The Fisheries Commission believes the Environmental Protection Agency (EPA) is responsible for preventing the pollution. Dr Lawrence Armah Ahiah, the Director of Inland Fisheries at the Fisheries Commission said the Commission have in the past collaborated with the local assemblies and the EPA to stop some illegal activities along river banks. “The health of the fishes, their development and their sustainability is the mandate of the Fisheries Commission but when the people are polluting the water, that is the work of the EPA,” Dr Ahiah stated in an interview with Piesie Okrah. Asked what the Fisheries Commission has to do about the situation, Dr Ahiah said they will “later follow up” and monitor the situation and “investigate” but also added that the EPA wil have to move to stop the pollution. Other residents who spoke to XYZ News indicated that the Assembly has refused to provide a place for the residents to dump their refuse. “There was a Zoomlion container, right here around the bridge on this river but for many months, they have decided not to bring it here again and that is why the borla [refuse] is all over. When it rains, it floats to our homes,” another fisherman told XYZ News.

Meanwhile, the Weija-Gbawe Municipal Assembly has assured that it will dispatch a group of sanitary inspectors and environmental health officers to the scene to commence investigations. Julius Sarpei, the PRO for the Assembly said “we will pursue the matter and make sure the pollution is tackled.”
Be the first to comment!
Leave Your Comment