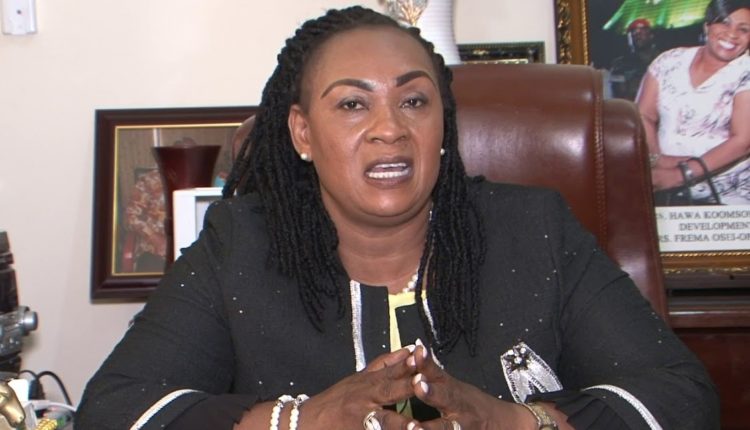 Hawa Koomson
President of the Canoe and Fishing Gear Owners Association of Ghana, Nana Kweigya, has described as selective the directive by the National Premix Fuel Secretariat to suspend indefinitely supply of premix fuel to four landing beach communities in the Central Region. The communities are British Komenda, Dago, Abandze and Moree. A statement by the National Premix Fuel Secretariat said the action was a punitive measure for the communities engaged in light fishing and other illegal fishing practices. "This is to inform you that following a directive by the Minister of Fisheries and Aquaculture Development, Ms Mavis Hawa Koomson, premix fuel supply to some landing beach communities in the Central Region will be suspended indefinitely,” the statement said. By letters to the Chief Executives of the Komenda Edina Eguafo Abirem (KEEA), Abura Asebu Kwamankese, Mfantsiman, and the Gomoa West district assemblies, the Secretariat explained that: “Light fishing and other illegal fishing activities perpetrated by fishermen is viewed seriously by the Ministry of Fisheries and Aquaculture Development (MOFAD) and its agencies because of its negative impacts on marine stock and industry growth. “The National Premix Fuel Secretariat and, indeed, MOFAD is aware that premix fuel, which is subsidised by government, is regrettably used to fuel generators for the illicit practice of light fishing.”

Speaking in an interview with Daily Graphic, Nana Kweigya said the selective enforcement of the laws on illegalities in the fisheries sector would not help efforts to solve the problem. He said the fight against illegalities was haphazardly being implemented, stressing that other illegalities — including the use of monofilament nets and undersized nets — were going on in many other communities. Nana Kweigya observed that in Abandze, for instance, while artisanal fishermen observed the relevant regulations not to use light for fishing, some inshore fleets were using light to fish. "There is no fishing community in Ghana where there is no illegality. In every fishing community, there is one illegality or the other. For what reason are these communities selected as culprits," he queried. "We complained to the ministry, but nothing was done about it. The ministry itself has given the tuna vessels permission to use light for fishing. Where are we going with this?" he queried.

Nana Kweigya said it was obvious that the ministry was only using smaller, less agitative communities as scapegoats while the main culprit communities were being ignored. He noted that the fishermen were committed to efforts to rebuild the fishery stocks, but stated that it was important for the ministry to meet with all stakeholders to seek general compliance. Ghana recently was issued a "yellow card" by the European Union, and risks a more serious sanction, if illegal fishing practices persist in the country’s waters.
Be the first to comment!
Leave Your Comment