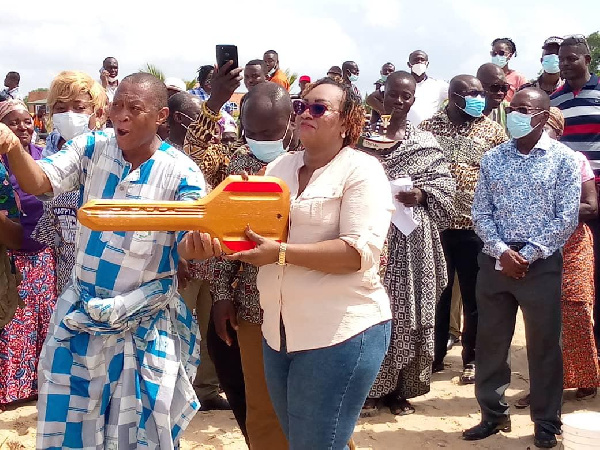 Picture of the minister doing the symbolic closing of the sea to put fishing activities on hold last year
The Ministry of Fisheries and Aquaculture Development says it has so far arrested four fishermen who have flouted the close season directive. According to the Ministry, two fishermen in the Central and two in the Western Regions have been arrested and currently facing prosecution in court. The Minister of Fisheries and Aquaculture Development, Mavis Hawa Koomson disclosed this when she donated some relief items to some fisherfolks in Tema. The items which consist of 200 deep-freezers, 2,000 basins, 2,500 wire mesh, 550 bags of rice and 2,300 boxes of cooking oil were to help reduce the effects of the closed season on livelihoods of the fisherfolks and to also promote compliance. According to the Minister, her outfit is engaging the fisherfolks to agree on a livelihood empowerment program which would cushion them whenever they get to the close season. The 2022 fishing closed season begun on July 1, 2022, and it is expected to end in August 31, 2022. The sector minister specified that, July 1 to July 31, 2022, is the closed season period for artisanal and semi-industrial fleets while July 1 to August 31, 2022, will be observed by industrial trawlers. Observance of the closed season, according to the Minister, is in line with section 84 of the Fisheries Act, 2002 (Act 625), and forms part of strategies to reduce the excessive pressure and over-exploitation of stocks in the marine sub-sector which will help replenish the fish stocks. “It must be indicated that the period of the 2022 closed season was agreed on based on scientific evidence and stakeholder consensus,” the statement said, indicating that during the closed season period, the ministry will not supply premix fuel to the coastal landing beach committees. The minister, in an earlier interview with journalists, described the 2021 fishing closed season as “largely successful”, despite initial agitations by some fisher folks. She said the closed season in July yielded more fish catch for both artisanal and semi-industrial fleets than catches in the same period of 2020 – where there was no closed season due to the COVID-19 pandemic. “The 2021 closed season, observed during the major upwelling, thus, allowed both the small pelagic and demersal species to spawn and grow much bigger for recruitment into the fisheries mix,” she said. Ms. Hawa Koomson also disclosed MoFAD’s intention to introduce an extra closed season from December to February to help in the replenishment of pelagic fish. “Based on scientific evidence and recommendations, it is the desire of MoFAD that an additional one-month closed season for all fleets during the minor upwelling season (December to February) be observed. This will be considered in the near future in consultation with fisheries sector stakeholders,” she said. She expressed the willingness of the Ministry to increase vigilance to combat illegal, unreported and unregulated (IUU) fishing which might threaten the sustainability and effort to rebuild depleted fish stocks. She added that, activities are far advanced for the acquisition of a research vessel and four patrol boats for the fisheries sector.
Be the first to comment!
Leave Your Comment