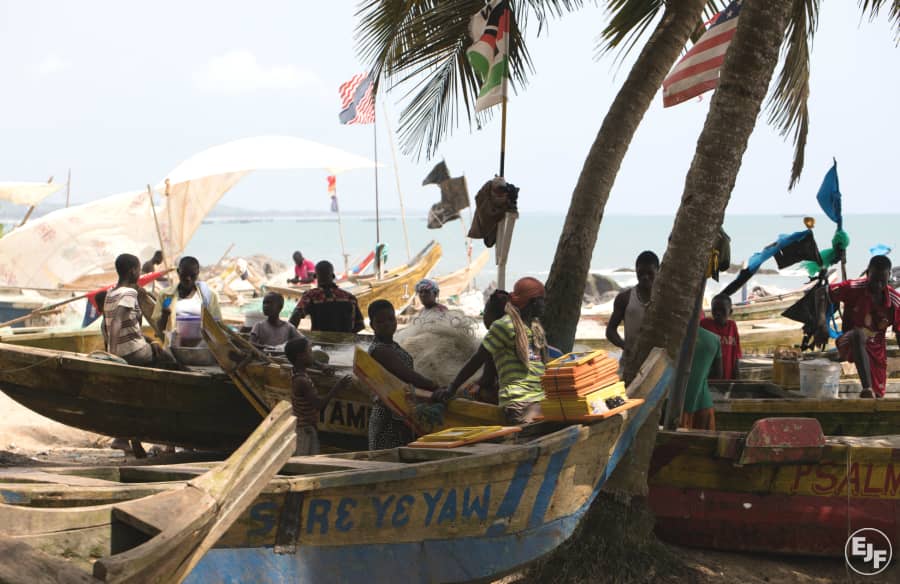 The Canoe and Fishing Gear Owners Association of Ghana (CaFGOAG) issued a press release calling all fisheries stakeholders to support the Ministry of Fisheries and Aquaculture Development (MOFAD) to “eliminate unhealthy competition” by industrial trawlers to artisanal fisheries. Its chairman, Nana Kweigyah, explained that the yellow card to Ghana by the European Union should be an opportunity to fight not only IUU fishing but to draw also a comprehensive plan for fisheries. “Stocks are going down and drastic measures should be taken,” stated Mr. Kweigyah in front of local media: “overreliance on enforcement is not sustainable and it is expensive.” Artisanal fishermen denounce the incursions inside the Exclusive Inshore Zone (EIZ), an area reserved to them, by industrial and semi-industrial trawlers targeting small pelagics and juveniles. Small pelagics are the staple catch of canoe fishers and staple food for the region and are severely overfished. For industrial trawlers to catch these fish, it means they are using the wrong size of net and they sell these, unreported, to coastal communities by transshipping them at sea into canoes, a practice that is called “saiko” and directly competes with artisanal fisheries. “Saiko” has been an ongoing battle at national level, with local stakeholders fighting over whether this practice was legal. Article 132 of the Fisheries Act 625 (2002) states that transshipment at sea is forbidden “unless authorised in writing by the Commission” and requires “supervision of an authorised officer.” Before the closing fishing season (July-August), the Ghana Industrial Trawlers Association (GITA) committed to stop (some of the) transhipment (saiko). For the CaFGOAG, however, the issue is not only the transhipment but the targeting of For the CaFGOAG, however, the issue is not only the transhipment but the targeting of these species by industrial trawlers which is crystal clear for they use “adapted trawl gears” and their incursions in the EIZ, which is “a reserve for small-scale fishers.” The majority of this trawl fleet is owned by Chinese, who bypass national laws using front companies and figureheads. Last June, the European Commission notified the Republic of Ghana a “yellow card” “based on various shortcomings in Ghana's ability to comply with its duties under international law as flag, port, coastal or market State.” This is the second yellow card that Ghana receives, the first one being in November 2013 and lifted in October 2015 after Ghana “addressed the shortcomings”. At the 2021 closure of fishing season ceremony, the Minister Ms. Hawa Koomson acknowledged that the sustainability objectives of closed seasons might only be attained when illegal activities, such as unauthorized transshipment, are eliminated.
Be the first to comment!
Leave Your Comment