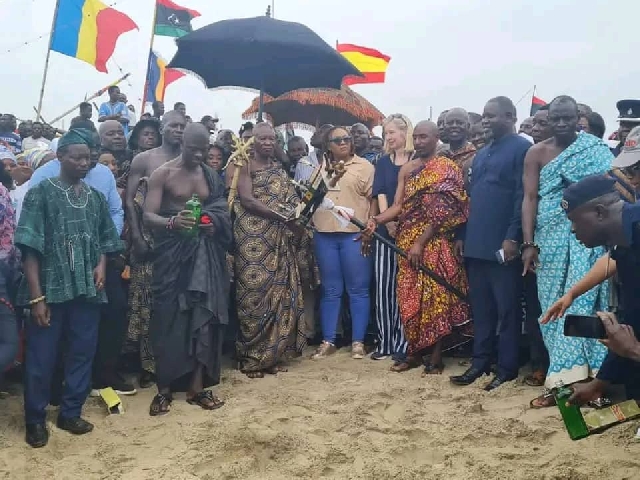 Fisherfolks pouring libation for the Minister to open the sea to end the closed season
The Minister in Charge of Fisheries and Aquaculture Development, Madama Hawa Koomson, has officially opened the sea for inshore and artisanal fishers along the coastal regions of Ghana. The closed fishing season which started from 1st to 31st July for canoe and inshore fishers and 1st July to August 31, 2021, for industrial trawlers was declared open by the Minister at the Tema canoe basin in the Greater Accra region. Speaking at the opening ceremony on Monday, August 1, 2022, the sector minister noted that the implementation of the 2022 closed season was not as smooth as expected as a result of challenges in the supply of premix fuel. She entreated all fishers to continue to follow all fisheries rules and regulations. “As the season opens, let us all abide by the rules of engagement in fishing activities as stated in the fisheries Act 625 as amended by the fisheries (Amendment) Act,” she stated. She also called on Ghanaians to stop politicizing the close season period and embrace it with good heart.
Be the first to comment!
Leave Your Comment