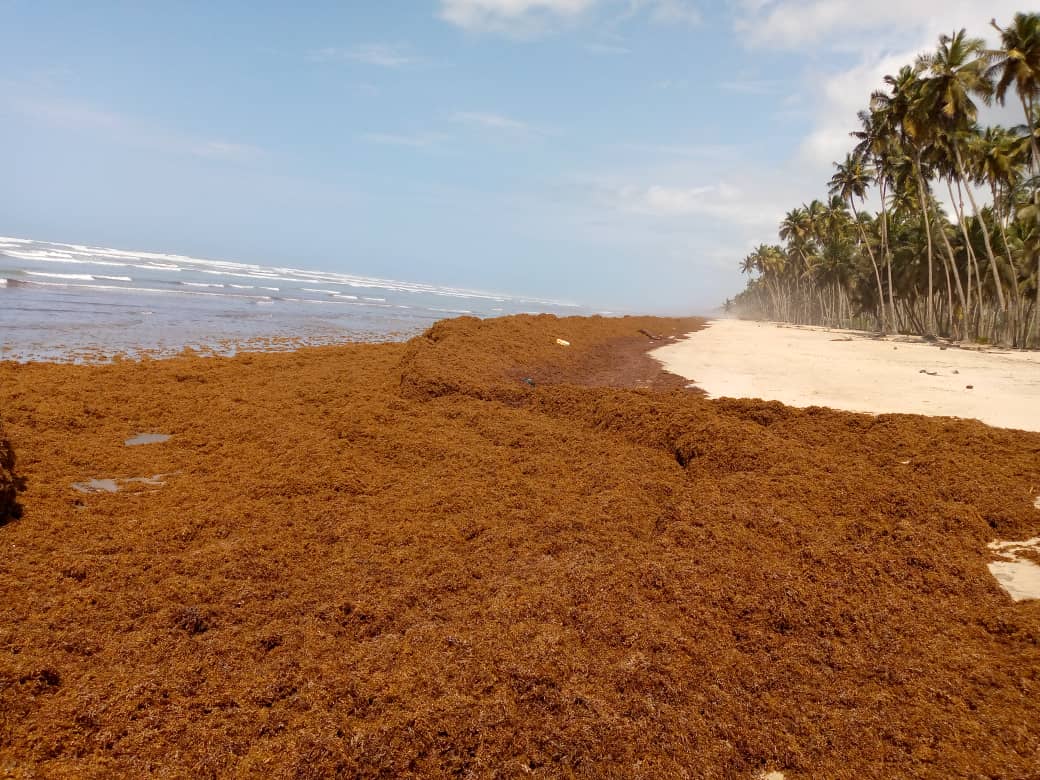 Sea weeds at Ghana's West Coast
Before oil and gas exploration activities started in the Western Coast of Ghana, communities on that stretch of the coast, especially the Nzema communities had enjoyed their fishing activities, a major source of their livelihood. But, since exploration started over a decade ago, the communities have on many occasions watched with utmost concern the devastation from the invasion of brown seaweed along the coast. Thus, the weed, which piles up along the coast and gives off putrid odour when decaying, has recently seen a gradual increase in size and area of coverage. From the coast of New Town on Ghana’s border with La Cote D’Ivoire to Dixcove, all in the Western Region of Ghana, this brownish weed has carpeted the shoreline, making it dangerous for children and adults alike to have access to the sea. Apart from this danger, the brown seaweed, which some say is Sargassum, has brought economic activity to a halt along the coast. Many of the communities depend either directly on the sea (as fishermen and fishmongers) or indirectly (as retailers, food vendors et cetera) who sell to these fishermen and fishmongers. In addition, the dire lack of fish from the sea has deprived the people of a very critical source of protein and of nourishment in general. The same phenomenon has also brought tourism activities along the coast to a halt. Yaw Erzoah, a resident of Bakanta, one of the affected communities in the Elembele District of the Western Region is blaming state institutions including the Environmental Protection Agency for failing to address the issue permanently. “What worries us even more, is the palpable lack of interest or information from institutions, national, regional and local in the face of this disturbing phenomenon. We are blaming the oil and gas companies for our woes but the EPA says it is not their fault and they haven’t told us the cause too”, Erzoah told ghenvionment.org in an interview. He said, the residents are blaming the oil and gas companies because, they never experienced any seaweeds until the oil exploration started. “But the EPA is saying it is not their fault, so what is causing this invasion of seaweeds. We need answers”, he said.

Meanwhile, the Ghana Environmental Advocacy Group is demanding action on the invasion of the seaweeds and has presented a petition to the Western Regional Minister, Mr Kwabena Okyere Darko-Mensah. Part of the petition reads “Our enquiries indicate that even though some personnel from the EPA (Environmental Protection Agency) have come around and taken samples, there has been no feedback on what they found. Meanwhile, our people have watched this get more serious, their numerous questions and concerns unresolved”. The group is therefore demanding that, the Western Regional Minister takes concrete and urgent steps to get all the agencies and organizations to act to resolve the problem facing the communities. “The EPA, as a matter of urgency, should share their findings on what this disturbing phenomenon is, and indicate what action it proposes to deal with it both in the short term and on a permanent, recurring basis. The Ellembelle, Evalue Ajomoro Gwira Districts and the Jomoro Municipal Assembly should engage the local people to explain steps to remove the nuisance seaweed from the shore to prevent it from returning to sea and causing extreme destruction to fishing activities in and along the sea”, the petition said. The petition is also demanding that, the aforementioned Municipal and District Assemblies be adequately resourced by the central government and compel the oil companies operating along the Nzema coastline to undertake environmental clean-up, adding that, the main companies working along the west coast – ENI, VITOL, GNPC, TULLOW OIL, GHANA GAS and others, bear a big part of the cost of dealing with this menace. The oil and gas companies, the petition suggested, should undertake the environmental clean-up as part of their corporate social responsibility towards the communities in which they operate, and as part of the State’s International Obligations under the United Nation Convention on the Law of the Sea (UNCLOS), Multilateral Environmental Agreements and/or Environmental Protocols as well as International Environmental Laws. “The three MPs representing the people in these communities (Hon. Emmanuel Armah Kofi Buah, Hon Dorcas Afo-Toffey and Hon. Kofi Arko Nokoe) must show a keen interest in what is happening to their constituents and leverage their privileged position accorded to them by their voters to seek the necessary remedy for the innocent and vulnerable residents who have been so harshly affected”, the petition added.
Be the first to comment!
Leave Your Comment