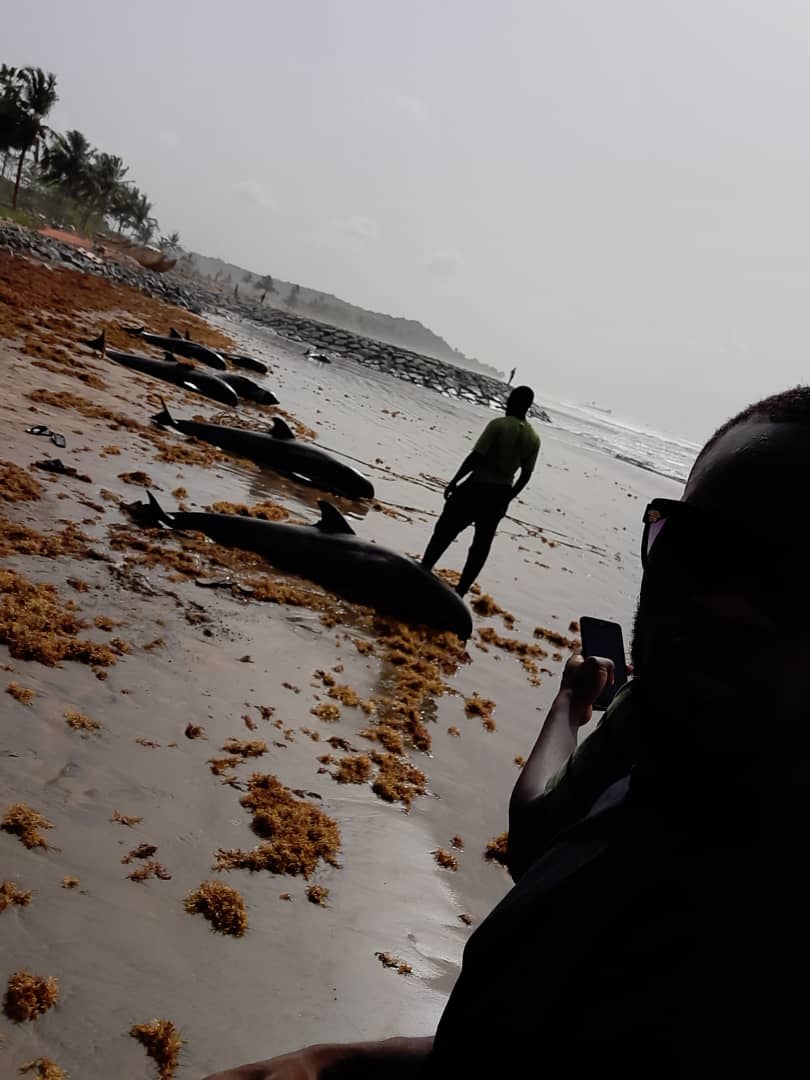 Dolphins who were washed ashore dead along the coast of Axim-Bewire in the Nzema East Municipality of the Western Region of Ghana in June 2021
If greenhouse gas pollution remains unchecked, global warming could trigger the most catastrophic extinction of ocean species since the end of the Permian age, about 250 million years ago, scientists warned in a new study today. During the end-Permian Extinction, researchers estimate up to 90 percent of marine organisms died out in overheated, acidic and deoxygenated oceans. The Great Dying, as it’s sometimes called, the worst known mass extinction event in the history of the Earth, wiped out more than half of all biological families, including more than 70 percent of land-dwelling vertebrates, leaving a clear mark in the fossil record. That cataclysmic change may have resulted from giant volcanic eruptions that went on for 2 million years. But a 2021 study suggested that carbon dioxide emissions from current human activity are twice as high as those that caused the Permian climate to shift. Ocean temperatures and oxygen levels are already approaching deadly thresholds for some organisms, such as corals and Arctic cod, and potentially threaten thousands more species, said Curtis Deutsch, a Princeton University geoscientist who co-authored the new research published on Thursday in Science. One of the reasons the researchers chose the Permian extinction as a basis for comparison was that its causes “seemed most clearly related to the kind of climate changes we are seeing now,” he said. “There were enough important similarities, the CO2-driven warming, the loss of oxygen, and the big response in the marine biosphere, that it seemed like the right comparison to start with.” Additionally, the researchers wanted to measure their results against “the clearest, biggest magnitude of signal in the geologic record,” he said. “When you think about 90 percent of ocean species disappearing, it’s extreme.”

Extinction is Hard to Measure

Human impacts, including global warming, may have already triggered a sixth mass extinction of an as-yet to be determined scope. Just in the last few years, there have been the first documented climate extinctions of species, like a tiny Australian rodent believed to have died out in 2019, and global waves of mass amphibian and insect die-offs. A study published this week in Nature reported that 21 percent of reptiles are threatened with extinction. But uncertainty about the total number of species on the planet makes it hard to calculate the magnitude of the recent die-offs as compared to past extinctions. If the starting quantity is unknown, it’s hard to measure what’s being lost. Tracking extinctions in the oceans is even harder. The National Oceanic and Atmospheric Administration, one of the world’s top ocean research institutions, states it is impossible to know the exact number of species that live there because more than 80 percent of the oceans are unobserved and unexplored. To overcome those challenges, Deutsch and study co-author Justin Penn, a geoscientist at Princeton University, used a decades-long database of marine animals’ tolerance of warming water and decreasing oxygen. With that data, they created 10 groups of simulated marine species types with similar tolerance characteristics to create a global biogeography of marine life, and modeled how different levels of warming will change the distribution of species and potentially wipe some out. They chose two very different emissions scenarios to show that today’s climate policy choices will make a big difference in the long run, Deutsch said. A high emissions path with up to 4 degrees Celsius warming by 2100 leads toward a mass extinction of ocean species that “would leave a clearly visible mark on the fossil record,” he said. But the path delineated by the Paris Agreement, keeping warming to between 1.5 and 2 degrees Celsius, could avert the devastation of ocean biodiversity. “We can pretty much avoid a mass extinction,” he said. “It’s not going to look like a biotic collapse in the fossil record.” Some climate scientists have recently questioned whether the high emissions scenario is still a useful metric. Rapid growth of renewable energy and new government and business promises to reduce emissions could hold warming to about 2 degrees Celsius by the end of the century, but policies to make that happen are still not in place. Global greenhouse gas concentrations are reaching new record levels each year, and Deutsch said that, given the political and economic uncertainties highlighted by events like the invasion of Ukraine, the possibility that diplomatic efforts to curb warming could fizzle can’t be ruled out. Malin Pinsky, a Rutgers ecologist and evolutionary biologist who wrote a Perspective article about the new research by Deutsch and Penn, said global policy choices the last few decades have already prompted massive and rapid ocean changes, such as sea level rise, ocean acidification and global shifts of species, which are affecting food security in developing countries. More than half of all human-caused CO2 produced since 1750 have been emitted in just the last 30 years. “We already know marine life is on the front lines, with species moving faster toward the poles than on land,” he said, citing the black sea bass, a fish species that has moved from offshore Virginia to offshore New Jersey in just a few decades. “It’s part of a massive reorganization of life on earth, and this paper really does a nice job of making clear the stark choices in front of us,” he said. The findings are important and sobering, said Michael Burrows, a marine ecologist with the Scottish Association for Marine Science, who was not involved in the study. Projecting long-term changes in dynamic and naturally variable ocean ecosystems for which there is very little monitoring is tough to begin with, Burrows said, and “a big problem with such projections, based on the present-day associations between species occurrence and climate (usually temperatures), is that the future climate conditions don’t exist anywhere on Earth right now.” But biodiversity has responded to climatic changes of similar magnitude in the past, he said. “By showing that their model of projected losses produces changes similar to that seen in past mass extinctions associated with similar climatic changes, the research has resulted in a more credible forecast of the upcoming extinctions due to anthropogenic climate change,” he said.

Has It Already Started?

Oceans have absorbed more than 90 percent of the excess heat trapped on the Earth’s surface by greenhouse gas pollution, building up at a rate equivalent to five atom bomb explosions per second. The average ocean temperature has reached record highs almost yearly, and its surface waters have grown 30 percent more acidic in the past 200 years. Hot water is already killing marine life, and has perhaps already resulted in extinctions of regionally endemic species, especially during extreme events like marine heat waves. There’s not enough data to know if the sixth great extinction is already underway in the oceans, but there are clear warning signs that global biodiversity is collapsing under the weight of human activities. Scientists estimate that more than 1 billion sea creatures, including birds, died during last summer’s extreme heat wave in the Pacific Northwest. The 2003 heat wave that killed about 70,000 people in Europe also extended over the Mediterranean Sea, where it triggered a series of mass die-offs of different ocean species, including rare corals. Recent global assessments suggest 40.7 percent of amphibians, 25.4 of mammals and 13.6 of birds are threatened with extinction. Elsewhere around the planet, warming seas have driven many coral reef ecosystems to the point of functional extinction. Other signs of disruption include increasing jellyfish invasions and rapidly expanded Sargassum seaweed in the Caribbean. Hot water was also implicated in a mass die-off of starfish along the West Coast of North America, diminishing kelp forests and a federally designated “unusual mortality event” for gray whales lasting from 2019 into 2022. “There is some evidence that extinctions have started ticking up already, but other human impacts are larger threats at the moment,” Pinsky said. But the new paper shows that global warming will soon overshadow other impacts like direct habitat degradation or pollution, he added. “What we do know is that extirpations, local extinctions already happen,” he said. “We do have evidence from a coral reef that even short periods of low oxygen can result in permanent displacement of a species from that reef.”
Be the first to comment!
Leave Your Comment