Deforestation, hunting and pet trade cause of the decline of white-naped mangabey- WAPCA 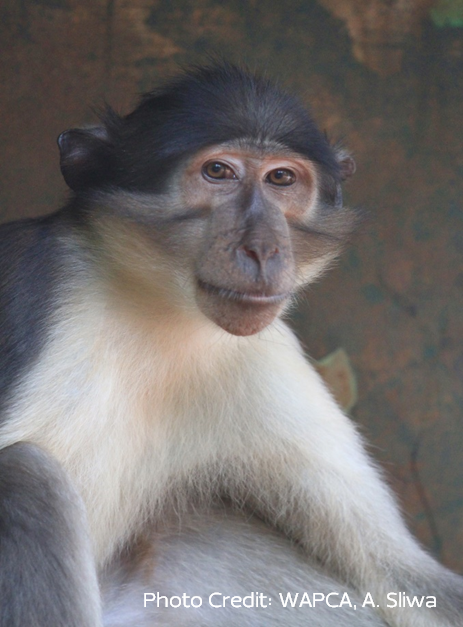 White-naped mangabey
The West African Primate Conservation Action (WAPCA) is blaming deforestation, hunting for bushmeat and pet trade as cause of the decline of white-naped mangabey in Ghana and some other West African countries. The white-naped mangabey, a rare terrestrial monkey, is classified as Endangered on the International Union for Conservation of Nature (IUCN) Red List of Threatened Species. A statement signed by WAPCA to commemorate the Mangabey Awareness Day (MAD) on August 1, 2022, said, recent assessment of the population of white-naped Mangabey indicates that, it is a step closer to extinction as it is estimated that there are 1000 white-naped mangabeys left in the wild. “They were once widespread in Ghana, Cote d’Ivoire and Burkina Faso, and currently, they are only found in increasingly isolated forest fragments. Their decline over the last forty years is due largely to deforestation and hunting for the bushmeat and pet trade”, the statement said. The MAD 2022 was celebrated in communities within the Ankasa Tano Community Resource Management Area which is located in the Jomoro District in the Western region of Ghana. According to the statement, WAPCA celebrates Mangabey Awareness Day to create awareness of this lesser-known primate species among the communities living near their habitat. “This celebration is important as it creates a platform to unite communities fringing primate habitats and reiterate the roles of these communities in promoting the long-term survival of the species”, it added. It said “Every year, WAPCA educates communities during MAD through conservation education stories using theatre and music. This combination is an original and little-used tool for sharing messages in a fun and engaging way. Conservation Education encourages people to act independently to conserve natural resources and responsibly use them by making informed decisions”. The statement added “Through educative and fun activities, we aim to engage, inspire, and empower all generations for the long-term survival of the white-naped mangabey and the forests they call home. All this requires considerable financial means, which will be made possible by the generosity of other organizations and companies concerned about the sustainability of this species”.

Spearheaded by Heidleberg Zoo (Germany), WAPCA is a local non-governmental organization established in Ghana in 2006. It operates in Ghana and Ivory Coast to protect and safeguard the future of endangered primates and their habitat in West Africa through a sustainable one-plan approach to species conservation by developing management strategies and conservation actions by all responsible parties for all populations of a species both within and outside their natural range.
Be the first to comment!
Leave Your Comment