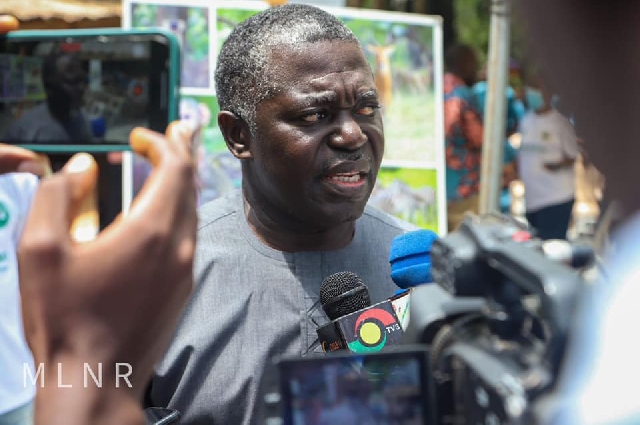 Benito Owusu-Bio
The Deputy Minister for Lands and Natural Resources, responsible for Lands and Forestry, Benito Owusu-Bio has today, Friday, 29th July 2022, launched the 2022 Closed Season for wildlife observation on the theme; "Wildlife is critical to our welfare, protect wildlife, protect nature and save lives" at the Accra Zoo. In his submission, the Deputy Minister announced that the 2022 close season begins from August 1 to 1 December, 2022, during which a ban will be placed on hunting, capturing and destroying of wildlife animals as stipulated in the Wildlife Conservation Regulations, L.I 685 of 1971. He said that the institutionalization of the close season is one way to protect the wildlife species as it provides the necessary conditions needed for the animals to procreate, nurse and nurture young ones for replenishment. He added that wild animals contribute significantly to the protection of the environment and without them, the environment or forests cannot thrive as they should. "Protecting them, therefore, at all cost is the sure way to safeguard the environment, especially when the impacts of climate change are increasingly becoming a threat to the planet earth and our very survival". Mr Owusu-Bio alluded that the Ministry is, therefore, committed to ensuring sustainable management and utilization of these resources and currently, the Wildlife Bill is before Parliament to be passed into law, adding that when this law comes into being, it will provide the legal framework to support the effective management of the resources. Speaking in an interview with the media, he warned that those who will go against this law in the next four months to hunt or capture any wild animal whatsoever will face the full rigor of the law. The Deputy Minister urged the Wildlife Division, which has the mandate to protect wildlife in Ghana, to be more committed to its duty of ensuring that our wild animals are protected for future generations. He noted that through government interventions and partners, wildlife rangers and forest guards are being given the necessary training and adequately equipped to effectively protect all natural resources which include wildlife. He continued that the Ministry through the Commission is also promoting the establishment of CREMAs to empower the communities to protect and sustain wildlife and forest resources in Off-reserve buffer areas. Also in his speech, Mr Owusu-Bio disclosed that one of the key priorities for the Ministry is to open up new zoos in all the 16 regional capitals across the country starting with at least four this year in Accra, Kumasi, Takoradi and Tamale. He commended the efforts of the leadership of the Forestry Commission for the new developments and upgrades of the visitor’s reception facilities at the Accra zoo and hoped that same upgrades will be extended to the Kumasi zoo. Katakyie Kwasi Bumagama II, Omanhene of Sefwi Wiawso traditional area, Acting Chairman of the Forestry Commission Board and Chairman at the event described the importance of the closed season as a valuable step that will help boast the number of wild animals and preserve wildlife as a whole. Katakyire called on all Ghanaians especially the traditional leaders to be circumspect during the closed season as he said some of these wild animals represent their totem. "The wildlife division and the Forestry Commission will need the support of all especially the traditional leaders to protect, manage and conserve these resources." He also stated that with the effort of the wildlife division and the support of Ghanaians, he believes that this closed season will not only help conserve wildlife but also augment them to promote the country’s culture, custom, heritage, ecotourism and economic development of the nation. Bernard Asamoah Boateng, the Executive Director for the wildlife division of the Forestry Commission on his part explained that the annual closed season is a critical regulatory measure adopted by the Wildlife Division to control the utilization and ensure the sustainability of wildlife. He added that the closed season serves as a respite for wild animals during their breeding period as well as to protect the wildlife species including elephants, pangolin, parrots, porcupine, civet cats, bongo antelopes among others. The Director disclosed that last year, the division in line with its enforcement and protection mandate, arrested 144 illegal hunters and prosecuted 57 of them with the rest in various stages of prosecution. Mr. Boateng in his address appealed to hunters and dealers in the wildlife enterprises to work within the framework of the law in the closed season and be circumspect during the open season and obtain the requisite licenses for their trade, upholding the principles of the Close Season. Some NGOs and security services present at the event were also given an opportunity to point out their strategy on how they will help ensure that the closed season is effectively observed by all.

The trading and hunting of wild animals in Ghana are male-dominated activities, with majority of the traders and hunters operating illegally and with impunity. Trapping, the most widely used hunting technique, has been found to impose brutalities on the captured animals. A study titled “The Wildlife Trade in Ghana: A Threat to Biodiversity Conservation” published in the Ghana Journal of Science revealed that, majority of the traders (77%) were between 16 and 30 years old, while the rest of the hunters were aged 40 years and above. Day-hunting was practised by 67 per cent of hunters, 56 per cent of whom used traps, and 33 per cent used guns and cutlasses. The remaining 11 per cent undertook group-hunting which involved chasing and running down the animals. The study discovered that, the traps used were mainly metal killer traps which exposed the animals to severe cruelty, as evidenced by the sight of captured animals with ruptured eyeballs, fractured limbs and blood dripping from parts of their bodies. About 56 per cent of captured animals ended up in the hands of traders, while the remaining 44 per cent went to chop bar (local restaurant) operators.

The study found out that, even though the level of awareness of the Ghana’s wildlife laws among various stakeholders appeared to be high, there is the need for intensive supervision and monitoring as well as enforcement of these laws. Thus, about 76 per cent of the wildlife traders found the business lucrative, and the same percentage were aware of the laws governing the sale of wildlife in Ghana. Also, 48 per cent knew exactly what the laws were, and the fact that the hunting of wildlife in Ghana requires a license issued by the Wildlife Division of the Forestry Commission. Only 24 per cent of the traders however had trading licenses, suggesting that the existing wildlife laws are not being rigidly enforced. “There appeared to be no arrests or reprimands for breaching the law on open and close seasons for hunting, as all kinds of live animals or carcasses were on display along the highways of Ghana all year-round”, the research found. Citations S. Odonkor, F. Gbogbo, D. Attuquayefio And L. Bimi

Well articulated, however despite the fact that a lot of arrests and prosecutions on wildlife offences are made in the country, majority of the offenders/criminals are so adamant that they go back and commit the same offence repeatedly. The fact is that the wildlife laws don't simply bite enough to deter offenders. Hence the need for swift passage of the Wildlife Resources Management Bill, currently with Parliament, into an Act.

Congrats to the Wildlife Division for their effort in sustaining our wildlife heritage despite all the challenges confronting the Division. Can't wait to see a Zoo in Sekondi-Takoradi.

Education of the general public on the laws of wildlife should encouraged so that it can be well known and observed. This should be done through the media by the management of the wildlife division at the various levels if any. Law enforcement officers of the Commission should be equipped with the needed logistics to be able to deliver their maximum.