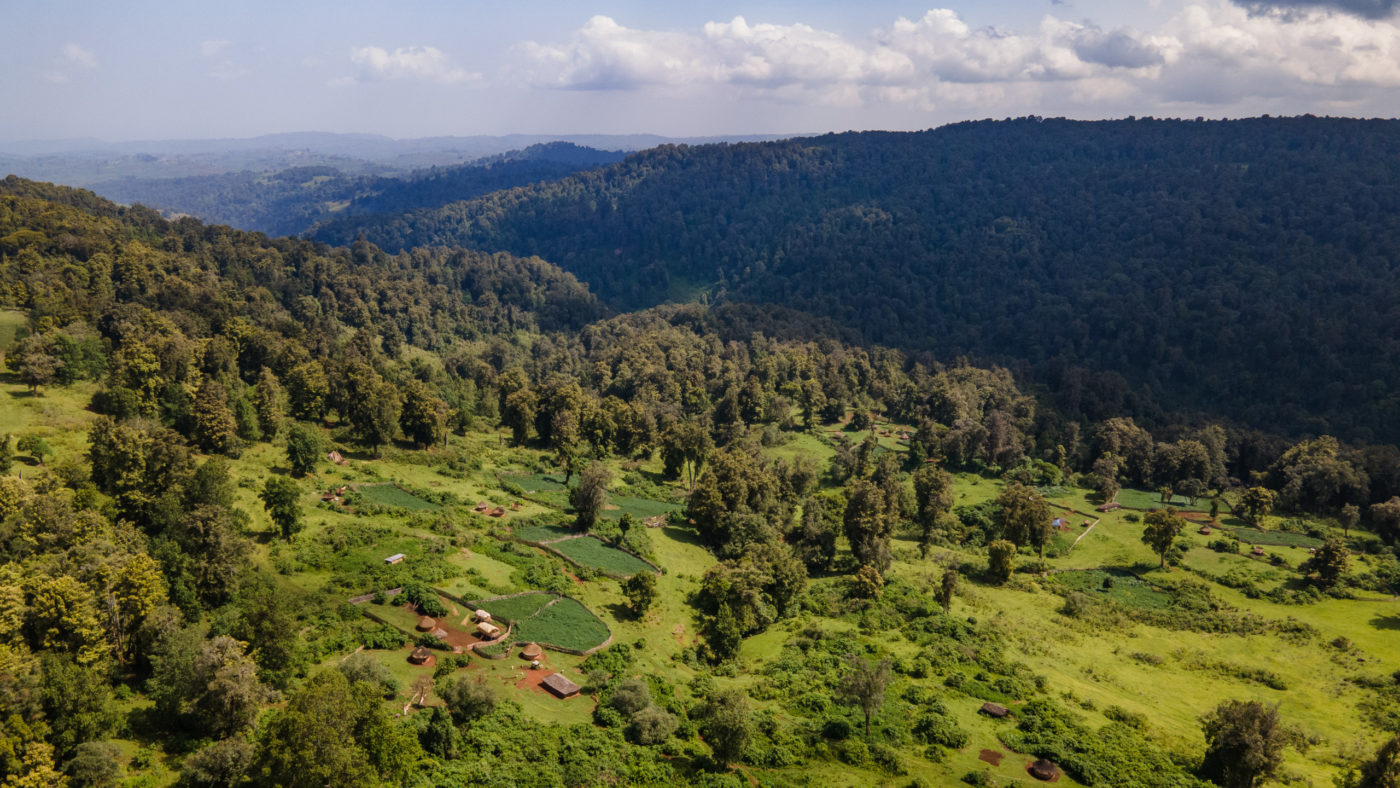 An Ogiek settlement in Kenya’s Mount Elgon National Park.(Image: Stephen Nderitu)
The home of the Ogiek, a traditional forest-dwelling people, in western Kenya is contested land. “There is an area taken by the Mount Elgon National Park inside our land. There’s another boundary to Uganda, which is left as a reserve, and then the remaining forest was declared Mount Elgon Forest in 1969. The remaining part of this land was declared a forest reserve in 2000. So, today, we are on government land,” explains Cosmas Murunga, an Ogiek elder and representative of the Chepkitale-Ogiek Governing Council. The reality Murunga describes contradicts a 2010 constitutional review that enshrined the rights of indigenous peoples and hunter-gatherer societies to own land in Kenya. “Ancestral lands and lands that hunter-gatherers have historically occupied” are considered to be “community land”, Kenya’s 2010 constitution reads. Entwined with this question of ownership and justice is also a question of land stewardship. The Ogiek of Mount Elgon, a dormant volcano straddling the border of Kenya and Uganda, see themselves as traditional custodians of the land, its health and its rich biodiversity. They describe their approach as an alternative to current, Western-driven methods of conservation, which too often overlook the interlinkages between people and the environment. “The solution has been there for generations but has never been acknowledged,” says Peter Kitelo, executive director of the Chepkitale Indigenous Peoples’ Development Project, a non-profit rights organisation based in the community of Chepkitale. “Indigenous communities could be holding the solutions to addressing global warming.” Since 18 July, governments, conservation NGOs, research institutions, community-based organisations and representatives, and private sector actors have been in Kigali, Rwanda, for the first ever IUCN Africa Protected Areas Congress, due to end on 23 July. The congress aims to “promote sustainable development while conserving Africa’s cultural heritage and traditions”. Members of the Mount Elgon community are there to share lessons from their traditional conservation methods, as an alternative to traditional approaches that have seen communities displaced and dispossessed of their ancestral lands.

A history of dispossession

Around 4,000 members of Kenya’s Ogiek people of Mount Elgon reside in Chepkitale, some metres from their ancestral village of Trans-Nzoia, now part of the town of Kitale. The Ogieks once owned 91,000 hectares of land, stretching across their ancient territories to Chepkitale. But not any more. They started losing land in the early colonial era after colonists seized control of areas on the pretext of clearing land to prevent forest fires. “At that time our land extended as far as Trans-Nzoia, which used to be Katale, which is today known as Kitale, where our ancestors were staying… When the British came, they declared that part of the land as whiteman’s settlement area. That was in 1895,” Cosmas Murunga recalls. “We are now left with nothing. [The government] says we are here illegally and that we should be gone.” In 1922, boundaries were drawn by British colonial officials on the lower side of the Ogiek lands. And in 1932, yet another boundary was drawn, dividing the community and separating them from the moorland and forest. “They were doing it on the pretext of creating a reserve and a forest area… And yet, in a real sense, they were making boundaries, in order to move us further away from our community,” Murunga says. “When our fathers realised that they were captives in their own land, they rioted and moved away from Trans-Nzoia, forced towards this mountain.” The withheld land was returned to the Ogiek by the Carter Commission, established in 1932, which collected views between 1932 and 1933 and submitted its report to the colonial government in 1934. By 1939, a natural forest reserve was established for the Ogiek, and the first assistant chief was appointed in 1940. The Ogiek community in Chepkitale was acknowledged by the British colonial authorities prior to Kenya’s independence in 1963 by the granting of administrative entities. A 1959–1967 agreement recognised Laboot as the Ogiek government’s administrative hub. But this step forward was reversed and followed by another round of evictions shortly after independence. “In 1963, when Kenya became independent, [the government] created what is now Mount Elgon National Park. Some of it was from the land that had been set aside as a native reserve,” Peter Kitelo says. The pattern of dispossession continued until relatively recently. Murunga – himself a victim of forced evictions – says houses were burnt down the very same year the constitution recognised their rights to their ancestral lands in 2016. “Animals died in the houses; they moved our animals to sell without consultation. So many properties were taken,” he recalls. Kenya’s Ogiek community is not alone in experiencing displacement due to conservation efforts. This year has seen tensions and violence in Tanzania as Maasai have been threatened with eviction from their ancestral lands in order to create a game reserve.

But Kenya’s colonial and post-colonial history of denying land ownership and rights to indigenous peoples such as the Ogiek – sometimes in the name of environmental protection – stands at odds with emerging expert consensus on conservation. In recent years, there has been a growing effort toward securing the formal, legal recognition of land rights for indigenous peoples and local communities. As the 2019 Intergovernmental Panel on Climate Change’s Special Report on Climate Change and Land states: “There is medium confidence that land titling and recognition programmes, particularly those that authorise and respect indigenous and communal tenure, can lead to improved management of forests, including for carbon storage.” In the face of converging global climate and biodiversity crises, there are calls from science, activism and policy spheres to increase and strengthen conservation programmes the world over, for example, via the 30×30 Initiative, which aims to protect at least 30% of the world’s land and sea by 2030. Given that important biodiversity conservation areas often overlap with territories inhabited and claimed by indigenous peoples, local communities and Afro-descendants, expanding biodiversity conservation holds significant implications for these communities, according to a report by the Rights and Resources Initiative (RRI), a global coalition of over 150 organisations dedicated to advancing the forest and resource rights of these groups, and the women within them. The Natural Resources Defense Council, a US non-profit, also states that global biodiversity goals must be attained by identifying and managing land “in collaboration with indigenous communities”. Communities and indigenous peoples are estimated to have claims to over half of the world’s land area under customary systems. Yet, only a fraction of those lands receives formal recognition from governments. The gap between what is held by communities and what is recognised by governments is a major driver of conflict, disrupted investments, environmental degradation, climate change and cultural extinction, according to 2015 research by RRI. An analysis conducted by RRI in 2018 reveals that over 293 billion tonnes of carbon are stored in forestlands managed by indigenous peoples and local communities. This is 33 times global energy emissions in 2017. According to the report, in tropical and subtropical countries, at least a third of this carbon lies in forests where indigenous peoples and local communities lack formal recognition of their tenure.

Kenya’s 2016 Forest Conservation and Management Act allows communities to co-manage forests along with the Kenya Forest Service. That same year, the landmark Community Land Act provided recognition, protection and registration of community land. Though around 67% of the lands in Kenya are now recognised as community lands, experts at RRI say implementation of the 2016 Community Land Act has been slow. “This is having a big impact and is perpetuating injustice against local communities and indigenous peoples… Since the passing of that law in 2016, less than ten communities have had their lands registered,” says Patrick Kipalu, director of the Africa programme at RRI. In 2008, the Ogieks started pressing for a return to their lands at various courts in Kenya through the Chepkitale Indigenous Peoples’ Development Project. The people of Chepkitale are persistent in their efforts to protect wildlife despite battling land rights. The hunter-gatherers have been kept on Mount Elgon thanks to an injunction order that the Chepkitale-Ogiek Governing Council leadership obtained against the Kenyan government in 2016, shortly after the evictions. “We have two court cases. One is specifically about the gazettement [titling] of Chepkitale as a game reserve in 2000. We have another one that [aims] to claim all our lands, and we have injunctive orders to that effect. And I think majorly that’s what is keeping us. Our people have been meeting the government people so that they understand that we also have rights like any other person,” Kitelo says. A legal framework introduced by the Kenyan government in September 2016 offers aggrieved people the chance to reclaim their lands by submitting records of historical land injustices between 1895 and 2010 to the Kenyan Land Commission for investigation. “We worked with communities to assemble their claims, go through the history of the dispossession of land or the grievances that they’ve had, within that time period, the ways that they’ve tried to address those claims, and what it is exactly that they are claiming using the protocol that had been developed by the National Land Commission,” Kendi Borona, facilitator of the Africa programme at the RRI, tells China Dialogue.

“We want to propose a new way whereby communities are not seen as threats in the discussions of conservation,” says Kitelo. At the IUCN Africa Protected Areas Congress being held in Kigali, Cosmas Murunga, as representative of the elders, introduced 144 guidelines developed by the Chepkitale-Ogiek Governing Council to safeguard the environment and promote coexistence between people and wildlife. One of the 144 guidelines suggests that grazing areas be divided into zones and used alternately during wet and dry seasons. Open moorland would be used during the rainy season and forest areas during the dry season, with some areas off limits and only to be used on the agreement of the whole community. In the suggestion, land areas are protected by the community as a whole. Another suggestion focuses on beekeeping, one of the Ogieks’ primary food sources. It states that beekeeping and honey harvesting must ensure the protection of the bees, beehives and trees. The community designates March and April as the months for honey gathering to maintain biodiversity, under the community’s advice. Ogiek concepts of human-nature relationships and duties run through the 144 guidelines. For example, “cutting down any tree with bees is prohibited. If one cuts the tree, he will be cursed… If the tree is cut for a different purpose and was found to be having honey, the offender speaks to the tree for forgiveness so that the curse does not pass [onto] him.” The guidelines also have relevance for larger, keystone species, such as the critically endangered African forest elephant, which made the Chepkitale side of Mount Elgon their home after they were “evicted” from their natural habitat by Kenya’s shamba agroforestry system. The system, run by the Kenya Forest Service, is designed to expand crop production and forest cover, but in several locations has resulted in the replacement of intact forests with commercial timber forests. “Small trees that the elephants feed on are seen as useless by the forest service because they cannot be sold as timber. But for us, they are key for producing honey. And they are also critical for the elephants,” says Kitelo, demonstrating the interlinkages of humans and the natural world for the Ogiek. 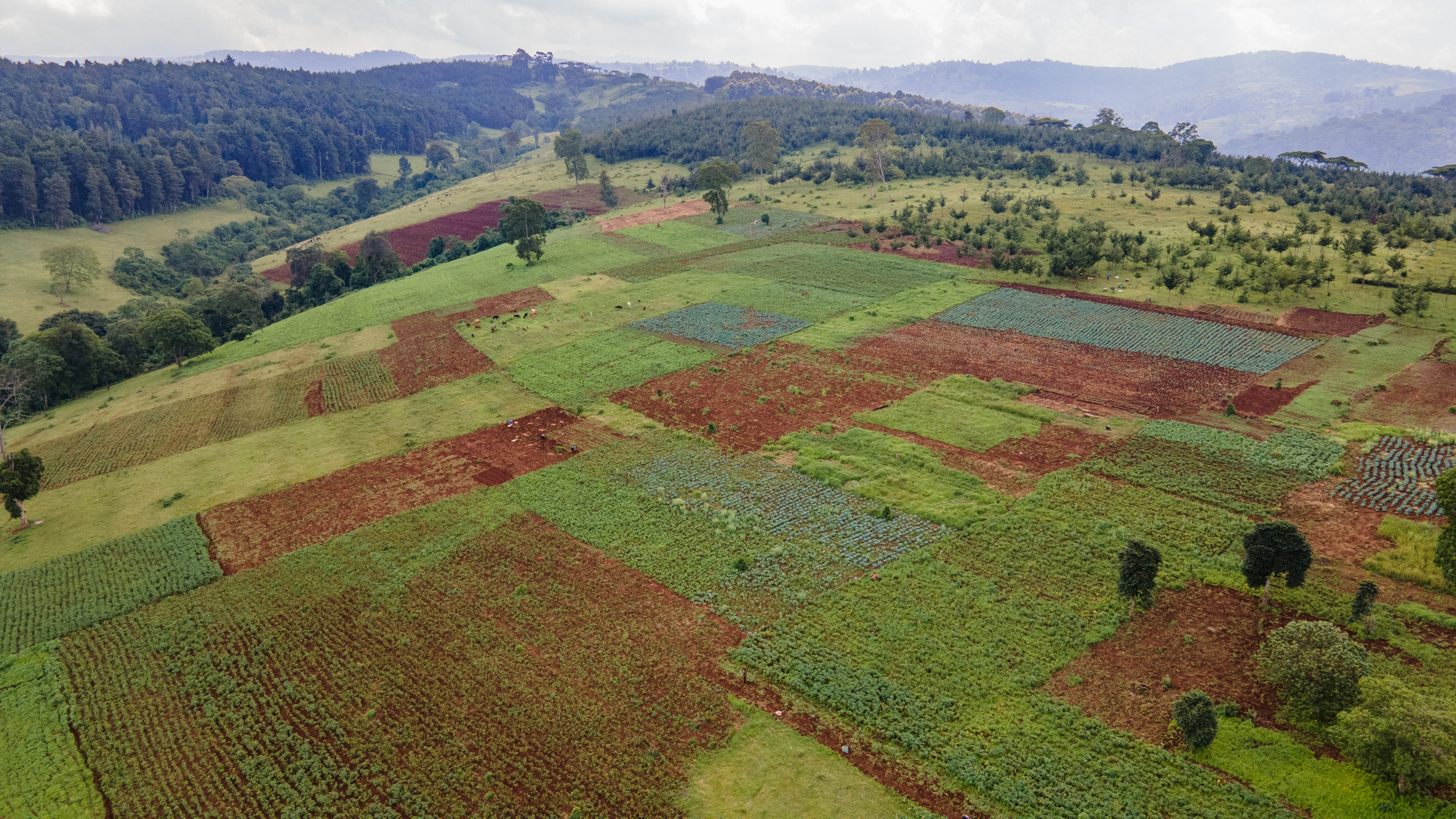