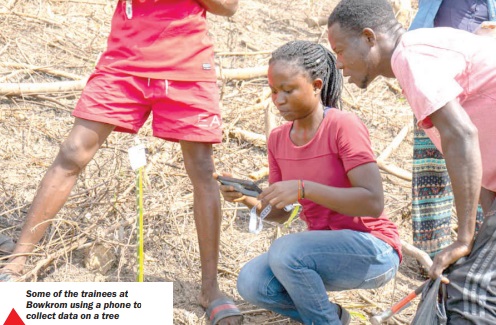 Tree tracking technology developed
A TECHNOLOGY to track the growth of trees planted under the Green Ghana project has been developed as part of efforts to ensure the trees are nurtured to maturity. It is jointly being developed by three organisations — Youth Bridge Foundation, based in the country; If Not Us Then Who - based in the United States, and Nature4Climate, a conglomerate of 19 global climate-focused establishments. Dubbed “DUAPA reforestation project”, it is a youth-led reforestation initiative that seeks to contribute to the country’s nature-based climate change adaptation strategy. It is hinged on transferring a proven tech-enabled indigenous conservation and reforestation system to the people. Under the project, community members collect data, monitor, track plant growth and also capture aerial view of landscapes of degraded lands. The digital innovation had already been adopted in communities in the Amazon Forest and Peru. A pilot project had also been implemented in Bowkrom in the Nsawam Adoagyiri Municipal Assembly (NAMA) in the Eastern Region.

Ghana’s last remaining tracts of primary forest can only be found within areas granted official protection. However, even these are no longer immune to the advance of deforestation, with many hits hard by a surge of forest loss. According to satellite data from the University of Maryland. Several areas of Ghana’s reserves are completely devoid of large trees, while the roar of chainsaws ever-present, operated with impunity. Sources on the ground say that illegal logging done at the hands of Ghanaian nationals as well as foreigners, especially Chinese and Indian nationals, appears to be the main cause of deforestation in the reserves. Farming activities is also a contributing factor to the deforestation.

As part of activities to launch the campaign at Bowkrom, some project partners visited the community to assess and train the youth in the use of the digital technology. The Municipal Chief Executive (MCE) of Nsawam Adoagyiri, Isaac Kwadwo Buabeng, advised young people in the community to take advantage of the training. The Communications Officer of Nature4Climate, Patricia De Matta, said: “It is rewarding to see the real action happening on the ground. It is being led by these young community members who are showing a high level of commitment and engagement. “The government is already aligned to this and together with our partners, the Youth Bridge Foundation, we are here to support this pilot and possibly scale up across various communities on the continent and in the world,” he said. The Chief Executive Officer (CEO) of Youth Bridge Foundation, Seth Oteng, expressed delight that the project was using the citizen’s science approach and a multi-stakeholder strategy that brought traditional authorities, the municipal assembly and community members on board. He said the trainees were taught how to collect simple data from the trees, input them on mobile phones, capture aerial views of landscapes using a drone for analyses. “This project comes at a critical phase of the country’s national climate mitigation and adaptation effort. The country has deployed nature-based solutions, most especially tree planting towards achieving its climate action strategies,” the CEO added.

The Eastern Regional Minister, Seth Kwame Acherman, urged the team not to relent in the implementation of the project, saying “there is no telling what this project can achieve for the country if done right”. “We can take a step further from our national tree-planting effort to actually track the seedlings as they grow. I am elated that you chose the Eastern Region to pilot this project and I wish you the very best,” he said.
Be the first to comment!
Leave Your Comment