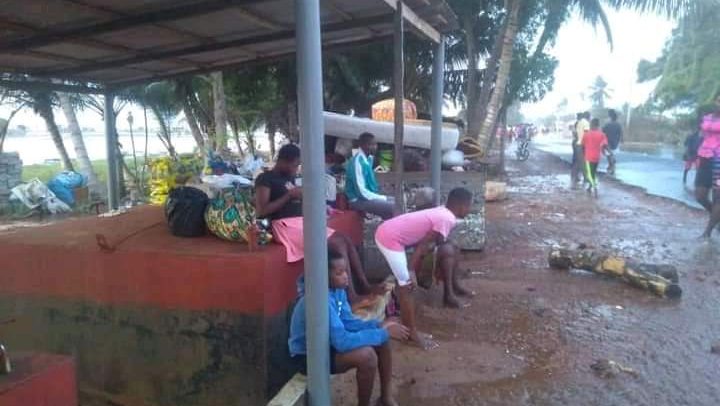 the Akplabanya community
Talks are ongoing to relocate the Akplabanya community as a result of persistent tidal waves destruction in the community almost every year. This was disclosed by the West Ada District Chief Executive, Sampson Tetteh Kpankpa during presentation of relief items to tidal waves disaster victims of Akplabanya and Anyamam communities in the West Ada District of the Greater Accra Region. The entire Akplabanya community is submerging as a result of torrential tidal waves, destroying properties worth thousands of cedis and displacing hundreds of families just some few weeks ago. The District NADMO in collaboration with the region managed to bring some relief items to be distributed to the affected residents. Sampson Tetteh Kpankpa, handing the items to NADMO for distribution revealed that, a parcel of land has been earmarked at Sege to relocate the Akplabanya community. He said they are in talks with the chief and his people hoping for some agreement for the community to be resettled whilst government looks at the ongoing sea defence project. The DCE noted that, though the relocation has been on the table for some time, it was not enforced due to the mild nature of the occurrence saying, they are now pushing harder due to the frequent striking of the tidal waves over the past few years. The Member of Parliament for Sege, Christian Corletey Otuteye, who was instrumental in the procurement of the items said, though the items were inadequate given the number of victims, it was meant to only commiserate with the affected people since there are other affected persons in other regions the government needs to also cater for. He re-emphasized the need to extend the sea defence wall or landing beach at Akplabanya to arrest the situation.
Be the first to comment!
Leave Your Comment