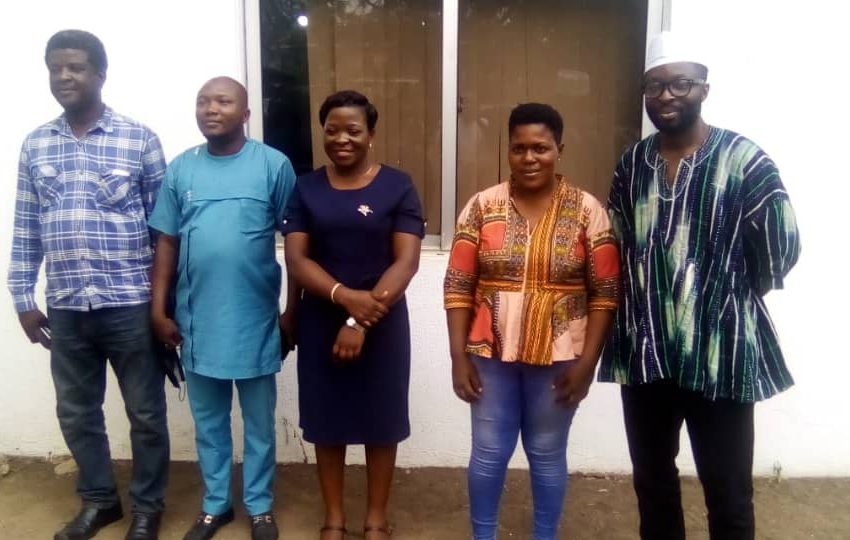 Members of Ghana Wash Journalists Network Ghana
The Ghana Wash Journalists Network Ghana (GWJN) has recommended to Stakeholders in the water sector, to revisit the natural strategy for protecting water bodies by engaging Traditional Authorities, Religious Leaders and Youth Groups to support the anti-galamsay fight in some communities in Western, Ashanti and Eastern Region of Ghana. This was revealed at a press conference, by GWJN based on its findings on the current state of water bodies in Ghana after a working visit to some selected water bodies in four regions. GWJN, with the support from WaterAid Ghana and Roddenberry Foundation’s 1 Global Fund, decided to find out the current state of some major water bodies in the country. The network worked in four groups, visited four regions namely Savannah, Western, Ashanti and Greater Accra. GWJN findings were divided under; State of Water Bodies; Access & Equity; Quality & Safety, and Sustainability. According to GWJN, statistically, Ghana is on the path to achieve universal access to safe and affordable drinking water by 2030 as targeted under the United Nations Sustainable Development Goals 6, which seeks to promote universal equitable access to safe and affordable drinking water for all. Addressing the press in Accra, Mr. Justice Lee Adoboe, the National Coordinator for Ghana Wash Journalists Network Ghana (GWJN) added that, in other to achieve the SDG target 6 on water and its related goals on sanitation, there is the need to adopt educational and strict enforcement approach at where polluters remain recalcitrant towards rules governing water bodies in Ghana. Again, MMDAs should be motivated to play their required roles in protecting water bodies across the country. Also, WRC, GWCL, Lands Commission, Forestry Commission and other Stakeholders should collaborate with MOFA and the Ministry of Fisheries and Aquaculture Development to cub the use of hazardous chemicals and unapproved fishing and farming methods around water bodies. Furthermore, WRC should be given more financial, human, and material resources as well as logistics such as vehicles to intensify regular monitoring of water bodies in collaboration with the MMDAs and community leaders. Not all, stronger efforts must be made through Town and Country Planning practices to reverse the trend of growth in human habitats preceding the provision of important utilities, especially water. In addition, GWCL and CWSA must collaborate to bridge the gap that exit in urban and peri-urban water system. GWCL should as a matter of urgency, consider using the provision of water for communities close to their intakes and treatment facilities as a kind of CSR, with subsidized tariffs as incentive for communal support for protecting water resources. GWJN and partners recommends the enforcement of regulations for commercial drinking water production and supply, borehole drilling and private water distribution to ensure safety for consumers.

Below is section of GWJN findings captured in its report:

Evidence from Ashanti (River Oda near Obuasi) and Western (Pra and Ankobrah) regions, as depicted in the video documentary, shows the persistence of water pollution on account of illegal mining popularly called galamsey. In the Greater Accra region evidence of water pollution persists as River Densu with its source in the Atiwa Forest reserve in the Eastern region is highly polluted by the uncontrolled use of agrochemicals, breaching of the buffers along the river and unauthorized and unhealthy fishing methods. The direct linkage between the state of water bodies, access and equity cannot be overemphasized, since these water bodies serve as the source of raw water for treatment to serve mostly the urban communities in Ghana. The state of these water bodies has direct impact on Access& Equity. The pollution puts enormous financial pressure on GWCL, as the company has to spend more money to acquire more chemicals for water treatment, and this also compels the company to service its machinery more frequently than normal. As seen from Odaso, the companys facility is only able to treat water at half capacity due to the high turbidity the raw water due to galamsey activities. This means water rationing is the only way those communities can be served. There are also gaps in access as seen from certain communities that do not have GWCL distribution networks connected to them. Tomefa and Nsuoano (Frafraha)in Greater Accra, Daboase, in Western region, Ninting in Ashanti region and Damongo in the Savannah region are some examples. Some of these communities resort to wells and dams, some of which they share with animals, and some also dry up in ethe dry season. The relatively affluent in these communities either buy water from water tanks, or sink boreholes. In some of these communities, children and women walk long distances to access the only water sources available. But generally, sachet water is the only safe drinking water available to some of them with its financial burden on households. There are concerns about the safety of some of these water sources, as in some communities, the sachet water the people depend on are from questionable production sources while many of those who sink the boreholes and wells did not get expert advice on them. Besides the cost burden water pollution imposes on GWCL, the situation also feeds into Climate Change as some water bodies and rivers dry up each year, which is another challenge to regular safe water supply. Some boreholes which used to produce water all year round now suffer irregular supply because of rainfall variability arising from climate change phenomena. IMPACT: These challenges hamstring the countrys effort to achieve the SDG target 6.1 and 6.3 which urge the implementation of integrated water resource management at all levels and create the problem of safety, sustainability ad equity in water service delivery. Also, infectious diseases of dermatological, including worm infestation, typhoid, diarrhea, (Damongo, Daboase) and skin diseases (Tomefa) are still prevalent in many of these communities.
Be the first to comment!
Leave Your Comment